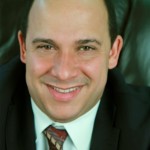 Joseph Bensmihen ’91YC, ’95W, the newest member of the Yeshiva College Board of Overseers, has long believed in the power of education. “My father’s motto was ‘Education is freedom’, and it was something he emphasized to me every day,” says Bensmihen, who is known to most of his family and friends as simply “JB”.

A native of Montreal, JB was born with spastic cerebral palsy, and doctors told his parents that their son would never walk. Fortunately, his parents never told that to JB, and never indicated that he couldn’t do anything because of his disability. “In addition to emphasizing the power of education, my dad told me I was the best every night before I went to sleep,” said JB, “and because of him, I believe it to this day.” Not only did JB walk, but the confidence his father instilled in him has carried him through his life and been instrumental in his success.

JB is a successful social worker and businessman in Florida who, with his wife Lisa, is co-owner and CEO of Boca Home Care Services, a private duty home healthcare agency. He is also the founder, in 2005, of Boca Home Care, a Medicare-certified home health agency. Both companies serve seniors and their families in South Florida. He is a former president of Boca Raton Synagogue; has four wonderful children, the eldest of whom will have his bar mitzvah this October; and is a kind, extremely funny, and engaging person. JB also administers the David Bensmihen Charitable Foundation, named in memory of his father, which provides scholarships for deserving students.

His accomplishments started early in life. At seven years old, JB was told he had to attend a special education school, instead of the local public school, in accordance with Canadian law at the time. “I hated going to that school, which had children of all ages and with various kinds and levels of disabilities, such as deafness and being wheelchair-bound,” said JB. “I just wanted to go to the regular school my sister was attending. I knew I could keep up, and thought the law was really stupid.” Thanks to his unwavering determination and confidence, the very young JB decided to tell the Prime Minister of Canada, then Pierre Elliot Trudeau, that the law should be changed, and so he had his father drive him to Trudeau’s office in Ottawa. “I learned then that if you walk like you know where you’re going and act like you belong, nobody’s going to bother you,” he said. He got all the way to the main office before a security guard even noticed the young visitor and tried to prevent him from entering. Hearing a commotion, the Prime Minister emerged to see what was going on, and when he was told what was happening, he declared, “If this young man got all the way to my office, I want to hear what he has to say.” JB promptly told him his law was “stupid”. “I was just as bold and confident at seven as I am today,” says JB.

In just a few years, after much petitioning and struggling with government officials, he and his father succeeded in changing the law so JB could attend the mainstream school with his sister. Such ambition and determination has marked JB’s path through life. In the sixth grade, he said, he simply knew he was going to be the valedictorian of his high school class, which he saw come to fruition upon graduating Hebrew Academy of Montreal. He always knew he would attend Yeshiva University, as he grew up with a strong foundation in Torah Umadda and was further impressed when several Yeshiva College (YC) students – among them, Moshe Kranzler, current director of undergraduate admissions – came to spend a few days learning and chatting with the high school students in a retreat.

At YU, JB took advantage of every opportunity that came his way. “I was involved in many extracurricular activities, like writing for the YC Commentator and acting with the YC Dramatics Society,” he recalls. JB’s roommate at the time and close friend to this day, Andrew Goldsmith (who also happens to be YU’s director of institutional advancement for RIETS and the Center for the Jewish Future), says the following of his inspirational one-time roommate: “Where others see obstacles, JB sees opportunities.”

After graduating YU with a degree in political science and working at a Montreal bank, JB befriended Jerry Lifschitz, a”h, who headed Canadian Friends of Yeshiva University. Lifschitz thought JB would make a great social worker, and insisted he attend Wurzweiler School of Social Work, with a scholarship fully funded by Canadian Friends. JB excelled at Wurzweiler, completing an advanced internship in his first year of studies, though he balked when the dean of the school suggested that he become a clinical social worker because he could most likely empathize with a struggling patient due to his own circumstances living with a disability.

“I sometimes say I don’t really care about helping or protecting people, that I just care about providing the resources to make sure that people can protect themselves,” says JB, who, in his job as CEO of Boca Home Care and court-appointed guardian for those who are vulnerable, clearly does help people every single day.

As for how he has maintained ties to YU over the years, JB says, “I have always been plugged into YU since I graduated, keeping in touch with Andy and Rabbi Kenneth Brander, who used to be the rabbi of Boca Raton Synagogue. I have supported YU over the years and when asked to become a Board member, I naturally said yes.” In his new official YU capacity, JB is most excited to reach out to alumni and the greater Jewish community, articulating the mission of YU and letting everyone know its recent accomplishments. “People take it for granted that YU exists, thinking it was always here and always will be, but that’s not necessarily true – we need to cultivate pride in and support for YU, ensuring that everyone knows YU is improved and keeps getting better every day,” he declares. “I understand the mission of YU intimately, and am one of YU’s biggest fans – I know I can communicate the University’s importance to others who may have doubt. Eight of ten times, when I speak with a high school student who has arguments for not attending YU, I change their minds and they end up going to YU and loving it.” Speaking to YU students today, JB emphasizes, “[Being a student at Yeshiva] is the best job you will ever have – you’re in a risk-free environment! Try anything and everything. For instance, I don’t know why students have ‘undecided’ as their major; you can change your major numerous times, so why not try a few different things and see what you like? You’re not going to get fired or lose a big investment from trying out the different courses, activities, and opportunities that exist at YU. Don’t be ‘undecided’.”

“JB always viewed those who wanted to exclude him as having the real disability, and that’s been the driving force of his impressive accomplishment in the business, personal and communal worlds,” declared Goldsmith. JB may walk with a cane, but he navigates his way through his personal and professional life better than most people, and will surely be a wonderful ambassador for Yeshiva University for many years to come.

Feeling inspired by JB’s story and interested in becoming an Ambassador for YU? To become a member of YU’s Ambassador Network and join other alumni in a wide range of volunteer opportunities supporting our students and graduates, visit www.yu.edu/ambassadornetwork.