A Month of Celebration and Gratitude for RIETS with Annual Dinner and Thanksgiving Yarchei Kallah Alumni Year in Review: 2011 By The Numbers

Shoshana Samuels ’08S, Sarah Cheses ’06S and Aliza Segal ’93S, ’93BR are wives, mothers, professionals, and holders of a very special title: yoetzet halacha, or female halachic advisor in the laws of family purity. The path to become a yoetzet wasn’t one they knew they would follow early on; for one thing, it wasn’t even offered as a formal training course until 1997, when Midreshet Nishmat, the Jeanie Schottenstein Center for Advanced Torah Study for Women, founded one. Officially called the Keren Ariel Women’s Halachic Institute, the program requires a dedicated and highly select group of women to spend two rigorous years – and over 1,000 hours – learning the various intricacies involved with taharat hamishpacha, the Jewish laws of family purity. The studies of these yoatzot halacha-in-training, which are overseen by rabbis and other halachic authorities, also include lessons in modern medicine and psychology, gynecology, and family dynamics. Before yoaztot halacha begin answering women’s questions and serving as an official communal resource, they must be certified by a panel of Orthodox rabbis.

Shoshana Fruchter Samuels ’08S was studying in the Graduate Program for Women of Advanced Talmudic Study (GPATS) at Stern College for Women when her husband, Ayol Samuels ’08YC, whom she had met on a Counterpoint trip to Honduras (co-sponsored by YU’s Center for the Jewish Future and the American Jewish World Service) in January ’06, was accepted into medical school in a joint program with Ben Gurion University in Israel and Columbia University. The program entails three years of study at Ben Gurion in the southern Israeli town of Be’er Sheva, with the final year of study at Columbia University in New York. Shoshana decided to get her Master’s in Jewish philosophy from Ben Gurion and enroll at Nishmat to receive training to become a yoetzet. That first year in Israel, Shoshana gave birth to her first child, Yehuda. She often took him, snug in a baby sling, along with her to class at Ben Gurion and Nishmat, which is based in Jerusalem and over an hour away from Be’er Sheva. She remarks, “Finding the balance between my dual studies and motherhood, and setting up a home in Israel was somewhat difficult, but it taught me to set very specific time frames in which to accomplish specific goals.”

“I tried to use every second wisely, and when that wasn’t enough I stayed up really late,” she laughs.

At Nishmat, she was in a group of ten women, which included Sarah Cheses ’06S, a fellow Stern graduate who was living in Israel at the time. “The hardest part about Nishmat was the intensity of the learning, but at the same time, it was also the best thing about it,” explains Shoshana. “I appreciated the level of learning and ability to really dive into the texts in-depth.” It was Shoshana’s training at GPATS that helped prepare her for the rigors of such concentrated learning. “At GPATS, I had the opportunity to develop my learning skills in preparation for Rabbi Moshe Kahn’s shiur and to learn Niddah with Rabbi Gedaliah Berger, and today, in my role as a yoeztet, I have gone back to consult my notes from that time,” says Shoshana.

Her skills in juggling numerous roles and responsibilities have helped Shoshana balance moving back to the States just after giving birth to her second child, Shlomo, and maintaining two jobs as a halacha and Jewish philosophy teacher at Ma’ayanot High School for Girls in Teaneck, NJ while serving as a yoetzet for Congregations Rinat Yisrael, Netivot Shalom and the broader Jewish community. Shoshana also serves as a visiting yoetzet for the Jewish community in Los Angeles, traveling a total of six times this year for Shabbat or weekend visits. Shoshana declared, “Becoming a yoetzet is, for me, a win-win. Not only did I get to engage in high-level study with women who are serious about their Jewish learning, but I was fortunate to emerge from the program with very practical skills that allow me to utilize my knowledge ‘on the ground.’ That I am able to use the knowledge I gained at Nishmat to help women is really a dream come true.”

Shoshana’s former Nishmat classmate, Sarah Cheses, thought she would become a doctor and, accordingly, majored in biology at Stern. “In my genetics class, Dr. Babich brought in Torah sources that related to the topic at hand. I once told him that I loved the fact that when we walked into genetics class there were excerpts from the gemara waiting to be studied, and the next day he gave me a whole packet filled with articles on Torah and science,” says Sarah. “That’s pretty unique to Stern.” 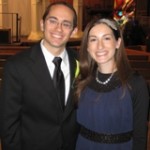 Sarah was drawn to teaching while in college, and taught science and Jewish philosophy at a girls high school after graduating. She then moved to Israel with her husband for a couple of years while he finished his semicha at the Gruss Institute. “When I first heard of Nishmat’s yoetzet program, I thought it was the perfect way for me to combine my love of learning halacha, and health and teaching,” says Sarah.

Now back in the U.S., she is completing her Master’s in public health at Columbia. She and her husband, who have a 17-month old daughter, Adina, also serve as JLIC educators for Yale University; the Orthodox Union’s Jewish Learning Initiative on Campus sends educators to serve on different college campuses throughout the U.S. to enhance Jewish learning and life on campus. Although she is not currently serving as a yoeztet for any particular community, she plans to give classes to different communities in the near future, and she is learning the laws of niddah in one of her chevrutas (study partnerships) at Yale.

“We all learn the basics of halacha, either in school or from our parents, but we often need to ask questions on more complicated issues. With nidda, most women receive lessons before their weddings, and that certainly isn’t enough education to know what to do in every situation,” explains Sarah. “Some women don’t feel comfortable asking a rabbi their questions on niddah and taharat hamishpacha, and having a community yoetzet allows those women to ask their questions, enabling them to keep halacha correctly and in a more enjoyable way.”

Aliza Segal ’93S, ’93BR, a native of Memphis, TN, was one of Nishmat’s first graduates, in 2000. After graduating Stern, she received her Master’s in Bible from the Bernard Revel Graduate School of Jewish Studies, where she met her husband, Dr. Michael Segal. The couple moved to Israel, which had been their longtime dream, and settled in Beit Shemesh. Aliza began teaching at Michlelet Mevaseret Yerushalayim (MMY), a seminary that offers serious learning for post-high school young women. “When Nishmat opened in 1997, it immediately interested me because I had been looking to learn in a high-level beit midrash for women, and its mission to help women appealed to me,” says Aliza. “It wasn’t clear right away what the program would turn out to be, and the term ‘yoetzet halacha’ was only created when they needed to put something on our certificates when we graduated!”

She continues, “Nishmat’s program turned out to be a revolutionary thing for the Jewish community, and I’m proud to be a part of that beginning.” After completing the program, Aliza taught at Ma’ayanot High School in NJ when her husband’s post-doctorate studies took them to the States for a year, and conducted educational research at Atid, the Academy for Torah Initiatives and Directions, back in Israel. She worked for the Nishmat hotline, and has fielded hundreds of personal calls (and visits) from women throughout Beit Shemesh and other communities in Israel, and sometimes even the U.S.

“There was such a thirst from women to have a female address these halachic issues of taharat hamisphacha,” says Aliza. She then went to obtain her Ph.D. in education at Hebrew University. Now, the Segals and their four boys, who range in age from 5 to 16, are back in the U.S. as Aliza completes her post-doc at New York University. She says, “I think it’s wonderful that a yoetzet has become professionalized in the U.S. within a communal setting. It will be nice when that happens in Israel as well.”

When asked about the best part of being a yoetzet, Aliza remarks, “Seeing the relief in someone’s eyes when she realizes she’s not alone in her situation, and that she has someone to help her get through it. There’s joy and sadness in this position, but seeing that feeling of relief is the most poignant for me.”

Feeling inspired by YU alumnae Shoshana Samuels, Sarah Cheses and Aliza Segal? To read about other fantastic and inspirational YU graduates, visit the alumni Web site and check out the alumni profiles; or, to share your own achievements, submit a Class Note.