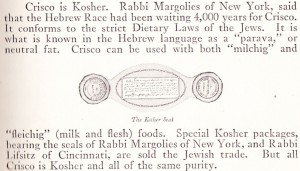 w you could have fried your latkes in kosher, pareve, Crisco, for Hanukah in 1911? In the days leading up to Hanukah in 1911, New York’s leading Yiddish newspapers, including the Forward and the Morgen Journal, ran a series of ads for a revolutionary new kosher product – Crisco. Crisco, a creation of the Procter & Gamble Company in Cincinnati, Ohio, had just been introduced to the general American consumer. The product had special appeal for the kosher market. It was a solidified pure vegetable shortening, and, as the advertising in the Yiddish press proclaimed, in addition to being kosher, it was also pareve and could be used to cook either dairy or meat dishes.

A lengthy Yiddish ad, in the form of an article, touted Crisco’s benefits in general and emphasized its advantages for the kosher cook. The ad stated that Crisco had invited Rabbi M. S. Margolies of New York and Rabbi S. Lifsitz of Cincinnati to the factory to inspect it and determine the kashruth of Crisco. According to the ad, the rabbis spent close to six months investigating Crisco, aided by chemists using scientific methods. The rabbis declared Crisco to be absolutely pure and kosher even for the most religious and exacting Jew, the “mehadrin min hamehadrin,” and placed a mashgiah temidi, a permanent kashruth supervisor, in the factory. Each can of kosher Crisco would have a certificate affixed to the container affirming that it is kosher and pareve. A copy of a contract between Procter & Gamble and Rabbis Margolies and Lifsitz, dated September 22, 1911, is in the Yeshiva University Archives, Congregation Kehilath Jeshurun Collection. It may be viewed here.

A pareve fat for cooking, baking, and frying was truly an innovation and a boon to the kosher household. After all, a kosher housewife couldn’t serve fluden [dairy or fruit pastry] made with butter after a meat meal! As the ad noted, most food preparation utilized either butter or schmaltz (chicken fat). Each substance had advantages and disadvantages for cooking in general and for the kosher kitchen in particular. The best grade of butter was expensive and cheaper butter was sometimes adulterated with other substances. Schmaltz could be made at home but it was a very lengthy, labor-intensive process which produced only a small quantity of fat. Crisco was a vegetable product, it met the terms of the Pure Food Law, it was inexpensive, easy to obtain, easy to digest, didn’t create unpleasant cooking odors, and could be heated to high temperatures. Traditional Jewish foods would be enhanced with the use of Crisco. Latkes fried with butter come out soggy and greasy; latkes fried in Crisco would cook in the blink of an eye and brown evenly. Even an inexperienced cook could make crisp, crunchy, latkes, provided they were fried with Crisco. The ad for Crisco added another enticement – every can of kosher Crisco would come with a book of recipes in Yiddish.

Procter & Gamble was proud that Crisco was kosher. In its book The Story of Crisco [1913?], the company reproduced the “kosher seal” and quoted Rabbi Margolies as saying “that the Hebrew Race had been waiting 4,000 years for Crisco.” The company advertised heavily in the Yiddish press and produced a bilingual Yiddish-English cookbook in 1933. Nonetheless, according to the Jewish newspaper advertising pioneer, Joseph Jacobs, Jews were initially reluctant to use Crisco, since despite its kashruth certificate, it looked like lard. In his pamphlet, The Jewish dietary laws in the day-to-day life of the Jew [1948], Jacobs explained that a chicken disease in the mid-1920s created a shortage of chicken fat for schmaltz, a situation which helped convince Jewish housewives to experiment with vegetable shortenings such as Crisco.

Since Crisco has been on the market many other companies have courted the kosher consumer with different types of pareve fats with varying degrees of success: margarines, Mazola and Wesson oils, Spry, Rokeach’s Ny-A-Fat, and Nut-Ola, to mention a few. In addition to Hanukah, when fried foods are traditional, the use of oil or fat became a subject of controversy in Jewish homes on Passover when oils derived from legumes (mei kitniyot) such as peanuts became popular. In Ashkenazic Jewish tradition, legumes, though not actual hamets, are not consumed on Passover, but opinions vary as to whether or not oils derived from legumes, such as peanut oil, are permissible. The current practice of the Ashkenazic community is not to use derivatives of kitniyot on Passover. Crisco, which lists soybean oil among its ingredients, falls into this category.

Today Crisco is distributed by the J.M. Smucker Company. It remains kosher and has been under the kashrut supervision of the Orthodox Union since 1985.

Enjoy your latkes, however you choose to fry them, and Happy Hanukah.