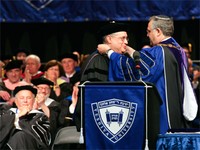 May 14, 2009 — Students at YU’s 78th Commencement Ceremony at Madison Square Garden’s WaMu Theater on May 14 received a send-off from someone they know well: Dr. David Shatz ’65YH, ’69Y, ‘72R, ‘72BR, the highly popular professor of philosophy at Stern College for Women. The esteemed scholar of general and Jewish philosophy gave the commencement address and was awarded the Presidential Medallion, the highest honor bestowed on a member of the faculty or administration for excellent service.

Read President Joel’s addresses to the class of 2009 concerning the need for respect and responsibility.

View a gallery of photos from the event.

“You are a master teacher and a master mensch,” President Richard M. Joel said. “You are not only a scholar, but a sculptor of scholars.”

Shatz, who graduated as Yeshiva College’s valedictorian 40 years earlier, paid tribute to the institution that had nurtured his intellectual and spiritual development. “Far more than I have done for Yeshiva University, it has done for me,” he said, recalling fondly “the schools that educated me, the teachers I loved, the students I taught.”

Shatz is the editor of the Torah u-Madda Journal and has edited or authored 12 books and published over 60 articles and reviews. He was ordained at YU’s Rabbi Isaac Elchanan Theological Seminary before earning his PhD with distinction in general philosophy from Columbia University.

Building on a text in the Midrash and lacing his address with humor and poignancy, Shatz lauded the many initiatives of YU students over the years that have advanced YU’s Torah Umadda mission. While these activities may seem routine to today’s students, he explained, reflecting on them inspires “the sense of living the historic.” He described how recognizing the historical context of one’s actions affects psyche, behavior and character. In concluding, Shatz evoked the image of the Torah scroll, which symbolically testifies to “how the few can influence the many, and how ordinary life can be sanctified and elevated with something so humdrum as ink and parchment.”

President Joel’s message to the Class of 2009 encouraged them to repair the world by sharing their blessings with their community, with the larger Jewish people and the world. “It is not always easy but it always matters. The generation you join is one that is hungry for meaning and community,” the President said. “Be prepared to join with them while recognizing difference and even profound disagreement. All this you have been taught. All this you have learned. It’s time to lovingly lead.”

Uri Westrich, valedictorian of Yeshiva College, picked up on the theme of teamwork in his speech. “During my time at YU, I found time and again that my efforts were more productive when working with other people,” Westrich said to his fellow graduates. “Our duty as Jewish people is to look past our differences and work together to create a better future.”

Haberman ’50Y, ’54R is an attorney who specializes in real estate and former rabbi of Congregation Torei Zohov. After his ordination from RIETS, Haberman obtained a PhD from Columbia University and a JD from New York Law School. A member of the Rabbinical Council of America, his publications include The Microcosm (1954) and Maimonides and Aquinas: A Contemporary Appraisal (1979). “A true Renaissance man,” he was honored, President Joel said, for “leading the Jewish community by example.”

Herskowitz, director of the YU Museum from 1976 to earlier this year, was honored for “shaping the museum into an academic enterprise so unique and so powerful, that it has become a critical piece of the modern Jewish story.”

As museum director, Herskowitz worked closely with philanthropist and benefactor Erica Jesselson to give it a special identity, shaping it as a teaching museum that would collect, interpret and exhibit the art, artifacts and material culture of Jews the world over. Over the years the YU Museum has become a magnet for Jewish artists from New York, Israel and around the world.

Schonfeld ’52R has led the Young Israel of Kew Gardens Hills for 54 years. He serves as president of Poalei Agudath Israel of America, and is a former president of the RCA and past chairman of the Council of Young Israel Rabbis. A recipient of the Orthodox Union’s National Rabbinic Centennial Medallion Award, Schonfeld is also the founder of the Vaad Harabonim of Queens. Recognizing these achievements, President Joel called him “the essence of rabbinic leadership” who has “come to define what it means to be a Torah Umadda Jew.”

At the age of 29, Miranda is the youngest person to receive an honorary degree from the University. The gifted young playwright composed the score and starred in the hit play In the Heights, which won four Tony Awards and a Grammy Award for Best Musical Show album. Born and raised in a close-knit Puerto Rican family in Washington Heights, he captured and celebrated the vibrancy and diversity of the neighborhood that is also home to YU’s Wilf Campus.

Ed Koch, former mayor of New York City, gave a special introduction to Miranda, whom he first met when he was seven years old, Koch said. Calling him a role model, President Joel said, “You have inspired a generation to take pride in their heritage, to dream the impossible and to make that dream a reality.”

More than 2,000 graduate students in the fields of law, medicine, social work, education, Jewish studies and psychology, as well as undergraduate students from Yeshiva College, Stern College for Women and Sy Syms School of Business, are being awarded degrees this commencement season.