Rap, Rock, Judaism and Israel Motivate Etan Goldman to Sing to the World

In the heart of Etan Goldman ’92YC, known to the world as Etan G The Jewish Rapper, beats a music composed of Judaic values, rock ’n’ roll, and rap.

“I am not a Jewish rapper but The Jewish Rapper,” he said. “I build my lyrics on Jewish concepts and ideas, like in my most recent album, ‘Foundation,’ where the music speaks to how being Jewish means that we are part of a chain going back thousands of years, that we’re part of something that’s built on a foundation, all done using rap and rock, the underdog music, a music that for me has always spoken up for what is raw and authentic and real.”

Having a blended heart and living a blended life is in Goldman’s DNA. He was born to an Iranian mother who had come to Portland, Oregon, as a student. She decided to give him up for adoption but only to a Jewish family. His adoptive parents, living in Phoenix, Arizona, and registered with Jewish Family Services, had the good luck to be that family, and in 1969, they traveled to Portland to meet their new son.

After short stays in Phoenix and New York City, the Goldman family settled in Baltimore, Maryland, where he did most of his growing up in an observant household. “Growing up as I did, it wasn’t unusual to think about going to Yeshiva University. My father, Stanford Goldman, graduated from Yeshiva College in 1961 and from the Albert Einstein College of Medicine in 1965. My sister is also an alumna, whose husband is also an alumnus, and my coolest NCSY advisors and a million friends went to YU. Going to the University was a very common thing to do.”

But his journey to YU was not as straight a road as it was for some of his acquaintances. As a student he was, by his own admission, “someone who didn’t fit into the mold of sitting still and learning.” He picked up some academic credits at a community college and also during a year spent in Israel. In January 1990, he enrolled at YU, graduating in 1992 with a major in psychology.

He attended the James Striar School (JSS) and took the usual academic courses, also branching out into acting, art and music because he is always seeking out other paths for his spirit to follow and other people to travel the road with him, like a rabbinical mentor at JSS who was a huge fan of The Who. “I was the kid break-dancing in the synagogues and doing graffiti (I even was commissioned  to do big graffiti murals for the people running for student body president),” said Goldman. “When I finished my classes or my homework, I’d be down in the Village seeing some music, I’d be on Broadway watching shows and plays—I was that guy.” 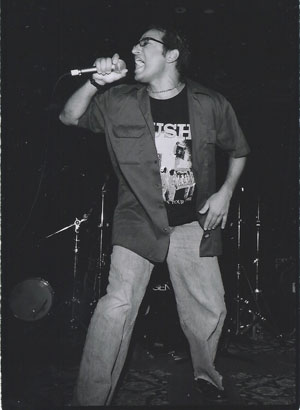 After graduating from Yeshiva College, he did odd jobs to keep body and soul together, eventually making his way to Los Angeles. The choice to move to the West Coast changed Goldman’s life. “When I moved to LA, I still had it in my head that I had to get a nice, normal job because ever since I’d been a teenager in Baltimore, being an entertainer wasn’t encouraged as a way to make a living,” he said. But in LA, he found a new community for himself. “Not only were there Orthodox people in the industry of entertainment but performing as well. I worked with a Jewish rock band called Shlock Rock, which is a Jewish rock parody band. And I worked as a videographer and did sound, bass and drum tech for a band called Evan and Jaron. I learned both sides of the stage, front and back. Ultimately, an investor said I should make my own album, and the rest is history.”

These days, Goldman’s major project—aside from his domestic responsibilities raising four children and keeping everybody’s carpool schedules in line as well as organizing an epic trip to Houston to help his family and others recover from Hurricane Harvey—is a not-for-profit organization he’s calling Rock4Israel.

The genesis of the organization came from the time Goldman spent making the rounds of the clubs and venues that hosted great music, sometimes by famous performers but more often by their backup musicians, the musicians that “live and breathe their instruments, and are giants at what they do.”

In his conversations with them, the subject of Israel would often come up, and Goldman found that most people’s knowledge about the country was not very wide and not very deep. “So I said to them that one day I would take them to Israel so that they could see the Israel that I see. That idea grew over time until this past January when I finally put the organization together so that I could bring the music to Israel and Israel to the musicians.”

He spends his days talking to potential sponsors and musicians and venue producers and finance people (“the YU alumni network is filled with a lot of people who know about these things”)—all the nitty-gritty work that goes into setting up an organization like this.

But driving this effort is his mission to educate people about Israel and Jewish values. “Going there will give the musicians a chance to rock, but it’ll also give the Israelis a chance to rock because rock ’n’ roll gets to the heart of Israel. What rock ’n’ roll meant to the world when it came along—its energy, yes, but also how that energy went up against the world—that is what Israel’s chutzpah is to the rest of the world, and this is what I want to show.”

“I’ve always been the guy at the center of the spokes, like in the wheel of a bike. I’m involved in this and that and other things as a rapper, rocker, producer, manager, sound tech, publisher, licensor, fundraiser and oh so much more, which brings me into all these connections and relationships—I’m not fully any one of these things, but I’m at the hub of them all. I’m just G.”

And G is always ready and willing to rock the world.

To nominate an alum for a future profile, fill out this form.