Immanuel Shalev ’08YC is the chie 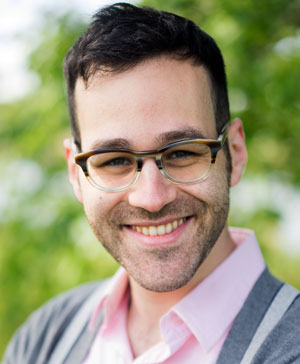 f operating officer at Aleph Beta Academy, an organization dedicated to Torah study that is, according to its website, “evidence-based, intellectually stimulating, emotionally gripping and relevant to your everyday life.” His work for Aleph Beta is part of a personal vocation to shift Torah study toward a perspective that sees it as “a guidebook that inspires us to live a more moral, deeper, happier life.”

The origins of Shalev’s perspective on Torah study began during his childhood growing up Lawrence, New York, in an observant household where he received what he called a “fairly typical Modern Orthodox education.” Shalev attended the Hebrew Academy of the Five Towns and Rockaway and Davis Renov Stahler Yeshiva High School for Boys, as well as spending a year of study in Israel at Yeshivat Kerem B’Yavneh.

In many respects, he found his Modern Orthodox education confusing. “People listen to secular music, watch secular TV and movies, and see themselves as part of a larger world subscribing to secular values; on the other hand, we’re Orthodox, urged by our rabbis to have complete dedication to halacha [Jewish law] and total devotion to Talmud Torah above all other values,” he said. “That split between Modern and Orthodox, or between Modern Orthodox and Yeshivish Judaism, was confusing for me.”

Coming to Yeshiva University helped him fuse these two seeming oppositions into a productive whole. “I believe in a version of Modern Orthodoxy that isn’t about balance between secular and religious,” he explained. “Listening to music, enjoying a movie, building a business and learning Torah can all be a religious effort.” YU healed these philosophical tensions “not only by giving me access to the best of both worlds but also putting me in touch with other bright young individuals navigating the same struggle, albeit with different resolutions. I really learned a lot from my peers at YU.”

That didn’t mean the navigation was easy for Shalev, but it was invigorating, as many philosophical journeys can be. “YU is not a magical place where Torah and madda [science] live together in harmony; you have to figure out how to manage the twin pressures on your own. That was scary for me, but the struggle built my character as well as a durable spiritual identity for the rest of my life.”

Part of that transformed identity came from being one of the seven original members of The Maccabeats, though at the time they were called The YU A Capella group. “We spent an entire year rehearsing four barbershop-style songs for an end-of-the-year performance in front of 25 people in the recital room on the second floor of the Schottenstein Center. We were (and still kind of are) a nerdy group of kids that took three minutes to start any song because we kept blowing our pitch pipe over and over again to make sure each person got his note,” he said. But with tremendous support from the YU community, especially Rabbi Josh Joseph, now senior vice president, and President Richard Joel, to record their first CD and move on to videos, “the rest, as they say, is history.”

Most importantly for Shalev, the formation of The Maccabeats confirmed and reaffirmed the artistic side of himself. He majored in history and went on to law school at Fordham University because “I bought the myth that to be a good Modern Orthodox Jew, you needed to make at least $250,000 a year.” But he soon realized that feeling obligated to follow that route came from a fear of taking a risk, not an ambition for success. “It wasn’t until The Maccabeats that I realized how being so scared of life meant that I hadn’t explored my own talents and passions.” Their first major success, Candlelight, in 2010, and his career as director of the Maccabeats convinced him not to practice law and instead “channel my creativity into a passion for inspiring a more meaningful Judaism.”

And this brings the story to Aleph Beta Academy, which for Shalev marries his creative and spiritual endeavors in life. “Growing up, I learned about halacha and gemara [rabbinical commentary] because I thought it was the right thing to do,” he explained. “But what was missing was the effort to get behind the laws and find the real meaning and inspiration that teaches you how to be a better person, how to live ethically with others, how to deepen your relationships, be a better parent, husband, wife, child. At Aleph Beta, we teach that kind of Torah. When you learn Torah for the values inherent, and not just the laws, it guides you to take the best the world has to offer and to see the beauty, spirituality, and sheer joy in everything.”

Shalev also acts on his life mission through his collaboration with Mayim Bialik, the actress perhaps best known for her work in Blossom from 1991 to 1995 and, since 2010, in The Big Bang Theory. They met because she was a Maccabeats fan, and Shalev became a producer to help out with her many projects, such as GrokNation, a lifestyle website which caters to women, and an energetic acting and writing career.

“Mayim is a brilliant woman with intense passion and drive, and a lot to share with the world. She wants to inspire people to approach life more thoughtfully, whether through questioning what they eat, how they parent or how to build empathy for others. Helping her spread her message is some of the most meaningful work I do,” Shalev said.

At this point in his life and career, Shalev is convinced that mixing technology, spirituality and narrative for an educational purpose can shift the world towards positive change. “I never wanted to be a rabbi,” he said, “in part because the ‘modern’ side of the Modern Orthodox is strong in me, and I thought my contribution to spirituality was going to be making a lot of money and donating it to good causes.”

But the worldwide success of The Maccabeats showed him the power that music had on the lives of their listeners, and that was the path he chose to follow. “The comments and letters we received—‘I haven’t lit candles in 20 years, but this video makes me want to start again’; ‘I’m a religious kid in public school, and I was too ashamed to wear my kippah in public, but this video makes me so proud to be Jewish, so I’m wearing my kippah now’—that stuff is really powerful. I realized, with the power of video, with the power of the internet, you can affect millions of people, and if I can take the very best of Torah, material that is compelling, moving, uplifting, and marry it with the best of technology, there’s possibility for real impact there. That’s what I’m passionate about.”