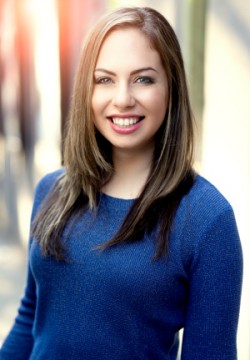 Leah Gottfried ’14S is notable for graduating as the first film major from Stern College for Women. “When I was eight years old,” she said, “I fell in love with acting. From there I started writing my own roles, and then got behind the camera, falling more and more in love with this kind of storytelling.” When she arrived at Stern College after spending a post-high school year in Israel, she worked with Traci Tullius, assistant professor of art, to craft a “shaped major” composed of courses already being offered at Stern, such as screenwriting and film history. “I had to fight for it because it had never been done before at Stern,” she said.

While at Stern College she began her own production company, Dignity Entertainment, whose mission, as Gottfried explained, is “to create meaningful visual content” that is both entertaining and inspirational. Her first work under the Dignity name was with the singer Shaindel Antelis, and since then she has branched out to music videos, commercial work for the company MeMoí, producing Operation: Candlelight (an action/adventure film for women and girls directed by Robin Garbose) and directing Angie’s Song (about the power of song and having one’s own voice).

Her current project, Soon By You, has garnered notice at New Filmmakers New York, Indie Fest and the Washington Jewish Festival (where it won Best Short Film). Soon By You chronicles the fraught and sometimes hilarious dating scene for Modern Orthodox men and women in New York City. It takes its title from a phrase commonly said to young unmarried women and men attending weddings, meaning both “I hope you’re next” and “Don’t lose hope – somebody will still want you.”

What makes dating so difficult, Gottfried noted, is that “the stakes are high in Orthodox dating because it’s for the sake of settling down, not fun. I wanted to tell a story to show these people they aren’t alone, and I also wanted to present Modern Orthodox Judaism in an authentic way to a wider audience.”

The story she tells in Soon By You is by turns touching and laugh-out-loud funny and tense and desperate and sweet. The initial film submitted to the festivals has now become “Episode 1: The Set-Up,” followed by the recently released “Episode 2: The Follow-Up.” In Episode 1, David, a rabbinical student, meets Sarah Feldman, whom he thinks is the blind date that has been arranged for him. They hit it off immediately, but he finds out that she’s the wrong Sarah. A running joke is how common a name Sarah is among Jewish women.) His date is Sarah Jacobs at the next table over, played by Gottfried, whose vapid and self-centered chatter makes David long for the first Sarah, who by this time is sitting with her blind date, Ben, a vapid and self-centered law school student whom she can’t help but loathe.

By the end of the evening, though, Sarah F. manages to slip David her phone number, and Episode 1 ends with the expectation that the mismatch will get unraveled and all will be sweetness and light. Except that Episode 2 starts with David having lost her phone number and proceeds with a looped and loopy search through New York City by David and Sarah J. (who wants to find the cute Ben), aided by David’s roommate, Z., and Sarah J.’s feminist friend Noa. As the curtain falls on Episode 2, we see the six characters seated around a table at a restaurant having a spirited conversation and thoroughly enjoying each other’s company.

Episode 3 is in production at the moment. Gottfried explained that they’re producing it as they procure funding. “Our resources for the next episode come from product placement contracts, sponsorships, and a donation page set up at JEN|LA,” she said. “As the money comes in, we film.” The slow pace has not kept Gottfried and her crew from thinking about future episodes, where they’ve already blocked out stories around Shabbos and family pressures.

Gottfried has a simple goal for the future: “I am going for the big time!” She wants to continue producing her own content, which means getting herself into a position where she has ready funding that she can draw upon to reach a wider audience. Writing, producing, directing–what she is doing now is what she wants to continue doing for as long as she can.