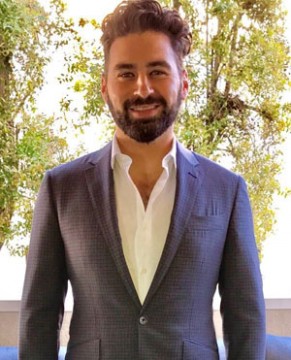 As a multi-platform marketing coordinator at 21st Century Fox (FX Networks) in Los Angeles, Aryeh Katz ’08SB works through multiple channels using an array of assets to promote the studio’s productions. This kind of work covers such things as promos, graphics, voice-overs, teasers and trailers, and it puts him in touch with producers, lawyers, and everyone in between.

Growing up in Los Angeles, Katz had an instant love affair with movies. “I have always loved films,” he said. “They gave me a chance to get away for a couple of hours.” He knew that he wanted to find a way to stay within that world if he had the chance to do so.

He also grew up in the Jewish world of LA. He attended Yavneh Hebrew Academy and Yeshiva of Los Angeles-Boys (formerly known as YULA), and then spent a year in Israel before attending Yeshiva University.

His focus on the Jewish aspects of his life changed when he began his studies at the Sy Syms School of Business. “When I came to YU,” he said, “I not only found it much easier to keep kosher and be observant, I also found that doing these things made me feel more deeply about what made me Jewish.”

At Sy Syms, he pursued a bachelor’s degree in marketing, in the process discovering his vocation. He has since worked in many different segments of the entertainment marketing industry. While at YU, he worked with Universal Music Group and since graduation he has had jobs ranging from setting up pre-Oscar parties and improving product placement in movies to customer marketing for NBCUniversal, coordinating post-production for Fox Broadcasting and brand marketing for Sony Pictures Entertainment, and his current position at FX Networks, where he has worked on programs like The Americans and Legion, and is currently working on American Crime Story: The Assassination of Gianni Versace.

“As you can tell, I really like the promotional side of the business, especially when it involves the more creative aspects,” Katz said. At the moment he is not interested in writing or directing, and his ultimate goal, if he had his choice, would be to become the president of marketing for film at 21st Century Fox. “I want to keep learning more and more about all aspects of marketing and promotion, especially with so many new platforms opening up and new ways to reach people.”