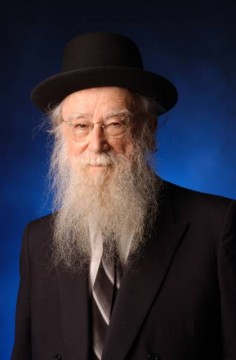 Born in Hungary in 1920, he immigrated to America with his family as a young child. Rabbi Weiss graduated from Yeshiva University High School in 1939, Yeshiva College in 1943, and received his semicha [ordination] from RIETS in 1940 as a student of Rabbi Moshe Soloveitchik. “He was a brilliant Talmudist and a genius student,” said Rabbi Zevulun Charlop, dean emeritus of RIETS. “He began his teaching career at YU as early as 1938, when he would deliver an explanation of Rav Soloveitchik’s shiur after class.”

Rabbi Weiss was the Perez F. and Frieda Friedberg Chair in Talmud at RIETS.

“Rabbi Weiss served as the core educator for hundreds of rabbis for over half a century,” said Rabbi Menachem Penner, Max and Marion Grill Dean of RIETS. “He has played an historic role in the transmission of Jewish law.”

He is survived by his wife, Rebbetzin Miriam Weiss; sons Hershel, Chaim Yeshayah and Shamshon; daughters Rivka Taub and Rochel Gottesman; many grandchildren and great-grandchildren; and talmidim [students] across the world. Rabbi Weiss was predeceased by his daughter Esther Alster, a”h.

May Hashem comfort the family with all those who mourn for Zion and Jerusalem. Shiva will take place at 473 West End Avenue Apt 2B, New York City.