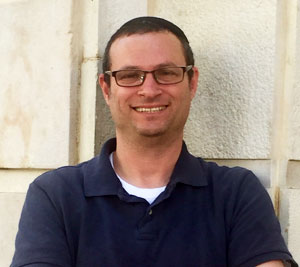 The orthodox household where Dani Waxman ’99YC, ’99BR, grew up in the Queens, New York neighborhood of Bayswater always had strong ties to Yeshiva University. Waxman’s maternal grandfather, Rav Dovid Lifshitz, was appointed a distinguished Rosh Yeshiva at the Rabbi Isaac Elchanan Theological Seminary by then-YU President Rabbi Samuel Belkin in 1944, where Lifshitz went on to serve for almost 50 years. Waxman’s father, Dr. Chaim I. Waxman ’63YC, ’66BR, ’66R, was also a professor at Azrieli Graduate School of Jewish Education and Administration from 1980 to 2001.

So perhaps it was inevitable that Waxman would find himself attending Yeshiva College and pursuing a joint BA/MA degree with the Bernard Revel Graduate School of Jewish Studies. But as important as the family connections were to his arrival at YU, “it was the belief in the ideal of Torah Umadda and the unique opportunity YU provided to excel in both that drew me to the University.”

His master’s degree work was in modern Jewish history, primarily under the mentorship of Dr. Jeffrey Gurock, the Libby M. Klaperman Professor of Jewish History, but he also enjoyed working with Dr. David Berger, Ruth and I. Lewis Gordon Professor of Jewish History and dean of Revel, and Rabbi Walter Wurzburger, who was an adjunct professor in philosophy at YU. He put his learning to good use as well, teaching Jewish history to high school seniors for two years at the Marsha Stern Talmudical Academy/Yeshiva University High School for Boys before making aliyah [moving to Israel] in 1999.

“My time at YU was an extremely positive experience, especially having the opportunity to study for two years with my grandfather,” Waxman said, not to mention that the woman who would become his wife, Faygie Alper ’92S, was also attending Stern College for Women at the time.

“By the time I was in YU, the Rav was already no longer coming to the University; however, I did have the zechut [good luck] to attend the Parshat Hashuva shiurim [lectures] of HaRav Aaron Soloveichik, and the mesirat nefesh [lessons on self-sacrifice] he had to teach his students is a memory I will never forget,” he said.

But Waxman’s Jewish studies weren’t his only passion at YU. Since high school, he has been interested in computers and taught himself computer programming. He secured a job in the industry and within the tech world explored different interests, starting out in IT systems and moving into product management and even some development work.

These two strands in his life – the technological and the spiritual – have come together in a product he has created called RecallCue, a connected day clock for families caring for a loved one with mild cognitive impairment or early stage dementia. The spur for this invention came from personal experience: For the past four years, the family has been caring for Waxman’s mother-in-law, who suffers from dementia. “I witness every day the challenges my mother-in-law and the family face,” he observed. “Developing RecallCue was a great opportunity to use the skills I have developed over the years and put them to use for a meaningful cause.”

Marketing the product is in its early stages, but Waxman and his business partner, Ephraim Tabackman, “have a rich roadmap of features to add based on the amazing feedback we’ve been getting,” he said. As Waxman noted, as the baby boomer generation ages, mild cognitive impairment and dementia are affecting more and more people, “and we know that we are not going to cure these diseases with this product, but I believe it can really improve the quality of life for both the people suffering and their families.”

Meanwhile, Waxman enjoys a rich and varied family life. Faygie is a leading pediatric feeding specialist in Israel and recently started an additional role as coordinator of the new Pediatric Palliative/Support Care Center at Hadassah Hospital. They have six children. The oldest, 25, recently finished serving five years in the Israeli army as an officer in tanks, while the youngest, 9, is finishing third grade. And in what spare time he has for himself, Waxman professes to enjoy great coffee, reading history, and photography.

RecallCue is now the focus of his spiritual and entrepreneurial energies. “I see RecallCue as a great representation of Torah Umadda, combining many of the values I have learned with cutting-edge technology to improve people’s lives.”