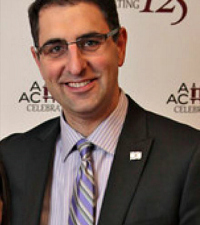 Jeremy Renna ’97SB came to Yeshiva University from Colts Neck, New Jersey.  He initially leaned toward going to Rutgers, but his family’s YU ties won out: his mother had graduated from Stern College for Women in 1964 in biology (Dr. Karen Bacon was her lab partner) and his uncle’s seven children also went to YU.

He enrolled in Sy Syms School of Business in 1994, and after trying out majors in accounting and finance, he settled on marketing “because,” as he said, “it fed my creative side.”  He especially enjoyed taking classes with Dr. Frederick Palumbo, associate professor of marketing, and Ira Teich, instructor in marketing and management. They helped him understand how the evolution of companies over time affects the interaction between customer and corporate psychology, an approach that also satisfied his interest in political science and the interplay between people and organizations.

His creative side also discovered that he had a talent for radio broadcasting.  He did some work with WYUR, the University’s radio station, but his greatest enjoyment came from being the voice of YU’s Maccabees.

“I was the public address announcer and did play-by-play for the basketball team,” he said. “I really wanted to play baseball, but YU didn’t have a baseball team at the time, and we couldn’t get an intramural baseball program going.” He did discover a love of golf while at YU, something he continues to do to this day.

As much as he loved the radio work, there was no career for him in doing it.  So, after graduating in 1997, he went to work for the Macy’s organization, where he still is today, serving as vice president for leased strategic planning and vendor collaboration.

“I made a bet with Macy’s,” he said in explaining his long tenure with the company.  “If they treated me well, I wouldn’t go elsewhere.” Macy’s did treat him well.  He advanced quickly, becoming one of the company’s youngest vice presidents, and was able to successfully weather the recessions of 2001 and 2009.  Today, he works with Macy’s many vendors to help them sell their products through Macy’s stores.

“I had an excellent time at YU,” he noted. “In my time here, I blossomed, changing from being shy to outgoing. It was such a tight community that it was possible to know almost everyone on campus.” He has made his way back to the campus by volunteering to speak in classes at Sy Syms.  For the past five years, he has worked with Dr. Marc Spear, assistant professor of business and communication skills, to speak with students once a semester about the challenges of being Orthodox in a non-Orthodox workplace.

For the past two years, he has also spoken in Dr. Tamar Avnet’s “Buyer Behavior” classes at Stern College with a specific focus of “trying to impress upon the students what it takes to succeed in business – in short, about the aggressiveness they need to make it.” He encourages them to read such books as Lean In by Sheryl Sandberg, the COO of Facebook, so that they have a more complete understanding of what they need to make their way in corporate America.

Like many alumni, Renna contributed to the “I Am YU” 24-hour Day of Giving on September 20. “The people who put this together,” he observed, “made it so easy to contribute–how could I not give?” He appreciated the tack that YU took in this fundraising project because, on a smaller scale, he and his wife, Tova, do the same work raising resources for their day school Rabbi Pesach Raymon Yeshiva and synagogue, Congregation Ahavas Achim (where Jeremy serves as President), in Highland Park, New Jersey.  “You have to be careful not to overdo going to the well,” he noted. “We are always exploring ways to excite people about supporting the organizations.”

Renna, along with his wife and three children (Miriam, Netanel and Aliza), are excellent models of YU’s principle of Torah Umadda in action, steeped as they are the Jewish life of their community but also solidly successful in the secular world around them. “I’ve been reading a history of Jews in America,” he said, “and you can connect the dots between the first Jews in the New World hundreds of years ago to the people who founded YU right up to us. It’s exciting to be connected to that history, to feel connected to the whole.”