On February 16, 2016 · In Faculty, Student and Alumni Profiles, News, Research 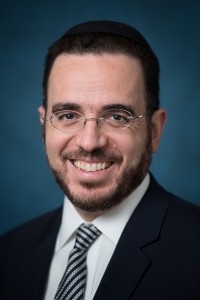 Associate Professor of Jewish History Richard Hidary has been accepted as a fellow for The Harvard University Center for Jewish Studies Harry Starr Fellowship in Judaica.  The entire Revel community congratulates Prof. Hidary on this impressive achievment!

The theme for the Starr Fellowship is going to be “Jews in the Classical World.” Prof. Hidary will be completing a book titled: “Rabbis as Greco-Roman Rhetors: Oratory and Sophistic Education in the Talmud and Midrash” to be published by Cambridge University Press.

“By analyzing extended examples of rabbinic sermons and lectures in the Talmud and Midrash, I find that the structure and style of rabbinic orations and lessons follow the same pattern as those practiced by contemporary sophists. There are also significant differences between the two sets of literature that reflect, in part, diverse attitudes towards truth, interpretation, and justice. Reading the Talmud and midrash within the context of classic rhetoric is invaluable to understanding and reconstructing rabbinic oratory as well as providing a rare glimpse into how one provincial subculture within the Greek East navigates overlapping identities while maintaining religious and social independence.” – Prof. Hidary

Prof. Hidary will also be devoting time to preparing a book chapter for CRINT’s new version of The Literature of the Sages, Part I, being edited by Professor Christine Hayes. This chapter will be titled, “The Greco-Roman West,” and will survey recent contributions to the study of Palestinian and Babylonian rabbinic Judaism and its literature as products of the Greco-Roman world.

In addition, he will be writing an article comparing Jewish and Classical Funeral Orations during the Talmudic Period. The primary focus of this research project will be to analyze quotations from funeral orations found in rabbinic literature, which range from a few words to a paragraph, and use them to reconstruct, as far as possible, the style, structure, and settings for these speeches. As Prof. Hidary explains, “My interest is to use funeral orations as a window into comparing the views of Jews and their neighbors on fundamental values of life, death, suffering, martyrdom, piety, afterlife, community, civics, family, and other central issues that orators would address at such opportunities.”