Alumna is a Lifeguard-Illustrator Among a Sea of Lawyers, Doctors and Accountants

Ann Koffsky ’93S has many doctors, lawyers, and accountants in her synagogue and in her Jewish community. However, she maintains a unique dual occupation: lifeguard/illustrator, with the main emphasis on illustration.

While at Stern, Koffsky minored in art, a subject she has been interested in since she was a young child. Still, it was a slightly atypical field for an Orthodox Jewish person, and she debated between law, communications, and teaching, leaving art for a hobby. After she fulfilled her minor, however, she realized that art was what she really wanted to pursue as a career, and so she switched art to her major.

“I loved Stern and had the best possible experience there,” said Koffsky. “The art department was full of like-minded students, and we all worked together and gave feedback to each other on our artwork, helping to develop our skills in a collaborative environment. Finding a frum artistic community is very rare once you leave Stern, and I am grateful to have experienced it as a student. I also made some of my lifelong friends there, and I loved being able to switch back and forth between art and Judaic Studies, another field of great interest to me.”

During her senior year at Stern, Koffsky secured a coveted internship at DC Comics, home of Batman, Superman, and Wonder Woman comic books. “I basically got the internship because I was persistent in phoning a specific editor until he finally offered me a job,” recalled Koffsky. “Perseverance really does pay off.”

Though the internship was largely comprised of Xeroxing and making coffee, Koffsky said the energy of the place, combined with the chance to learn from masters of the field by simply watching them work, was beneficial to her. “I learned a lot just by picking things up through osmosis,” she said. She ultimately decided that working in the comics industry wasn’t for her, but appreciated having the chance to determine that while still in school.

“I decided that writing and illustrating children’s books fit my whimsy more, and I think educating kids is one of the noblest goals,” Koffsky explained. “Creating fun and interesting books and illustrations for children is really where my soul is, and where I feel I can make a difference.”

During the summers, Ann works as a lifeguard at her children’s day camp, where she received inspiration for her most recent book, Noah’s Swimathon, published by URJ Press. The book, a story of a young boy learning to swim for the first time, was selected to be the June gift for those signed up to PJ Library, a wonderful resource that sends a Jewish book or CD each month to Jewish families across North America. 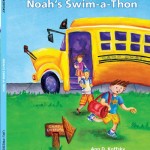 Many of Koffsky’s works focus on Jewish themes, and she has authored and illustrated books on Passover, Chanukah, Shabbos, and Israel. In total, Koffsky has worked on over 20 books for children, and designed toys, calendars, over 100 greeting cards, and ketubot (Jewish marriage certificates) for major companies, including Hallmark and Papyrus, and individuals. Her book, My Cousin Tamar Lives in Israel (URJ Press), was given a Notable Book designation by the Association of Jewish Libraries. 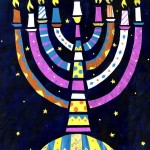 She spoke about her work and reviewed student portfolios in an event sponsored by the art department on the Beren Campus in April. She has already been invited back for fall 2011.

Koffsky and her husband, Mark ’93YC, live with their three children in West Hempstead, NY. To reconnect with Ann or other YU alumni, visit www.yu.edu/alumnidirectory.