Alumni Profile: Meet the Class of 2012

While we usually highlight one alum or alumna of YU in this space, in honor of the recent Commencement that took place just a couple of weeks ago, we thought we’d introduce you to some of our newest alumni: those who just graduated. Read below as Perel Skier ’09S, writer for YU News, profiles some of the shining stars from the class of 2012 as they reflect on their YU education and discuss their hopes and dreams for the future.

On Brink of Professional and Academic Careers, New Graduates Reflect on Undergraduate Experience

They are art historians, human capital consultants and biotechnologists. They come from Jerusalem, Montreal and Miami. They’ll be pursuing cutting-edge graduate work at first-class institutions like Harvard and New York University. They’ll build their own businesses from the ground up. And they’ll also be giving back by teaching at schools for children with special needs and developing innovative educational programs about world issues.

They’re the Yeshiva University Class of 2012!

On May 24, more than 750 students marched across the Izod Center stage at Yeshiva University’s 81st Commencement Exercises, as they celebrated the completion of their undergraduate careers. However, these new alumni know their education is far from over.

As they begin the next chapter of their lives, members of the graduating class reflected on the good times, the defining moments and the takeaways of their unique YU experiences. 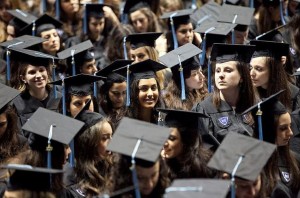 Ayala Raice of Monsey, NY, double-majored in art history and English literature at Stern College for Women. As a student, she founded the Art History Club (“Later we changed its name to ‘The Arts Society’”), organizing craft classes, speaker events and scavenger hunts through the Metropolitan Museum of Art.

“YU signified for me a grand conversation between two worlds of my life that I believed could be and should be in dialogue with each other,” said Raice, recalling three summers where she studied abroad on YU honors courses in Israel, Great Britain and France. “Studying art in Paris with my friends was definitely a great moment in my YU career.”

In September, she will begin a two-year master’s degree program in art history at NYU’s Institute of Fine Art—a step along a path Raice hopes will culminate with a Ph.D. and professorship. “I have been able to develop my own skills and really develop as an intellectual because of the attention I have been given here.”

Lawrence Albert of Montreal, Canada, studied economics at Yeshiva College and completed a minor in general business at the Sy Syms School of Business. In July, he will begin work at Mercer, a human capital consulting firm.

Growing up in a Traditionalist Jewish home, Albert sought a university experience that would deepen his connection to Judaism while he honed his professional identity. “As someone seeking to meld a life that has a strong Jewish communal focus with a high-powered career, balancing my Judaic studies with my academic and extracurricular aspirations has been an incredible life lesson,” said Albert. “Pushing myself hard during the days at work and then going back to the beit midrash [study hall] at night has meant a lot to me.”

Connections with other students and alumni pursuing the same goals have also been meaningful to him. “The incredible network YU provides has been fulfilling, providing me with personal and professional mentors who have helped me with my future,” said Albert. “One YU alumnus who does consulting and balances a tremendous work schedule with his family and learning still made time to talk with me to help me figure out what I want to do. He was an example to me that I can do that, too.”

Avital Chizhik of Highland Park, NJ, majored in English with a concentration in journalism at Stern College, where she was also president of the Israel Club and a section editor on two undergraduate newspapers and the University’s literary journal, Something Rich and Strange. As a student in the S. Daniel Abraham Honors Program, Chizhik realized a lifelong dream when YU helped her secure an in-person interview with celebrated Israeli author Amos Oz as part of her research for a senior thesis in Hebrew literature. 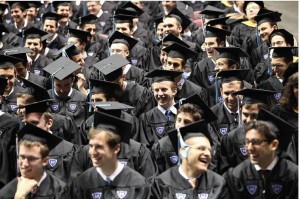 “I’ve grown to really appreciate YU’s openness to exploring nuance,” she said. “This past summer, I participated in ‘Counterpoint Arad,’ a life-altering service learning program fused with an accredited political science course organized by the Center for the Jewish Future (CJF) in the Negev. During the program, which was a unique combination of on-the-ground activism and academia, I spent three weeks teaching English to teenagers in Arad.”

Next year Chizhik plans to gain legal experience and pursue a career in communications. She is also excited that her younger sister, Dina, will begin her studies at Stern in the fall. “I highly encourage high school seniors to come here,” said Chizhik. “Only in this institution could I have examined my identity and heritage with such intensity.”

Simon Goldberg of Jerusalem, Israel, majored in history and minored in political science at Yeshiva College. During his undergraduate career, he was involved in STAND: the Student Anti-Genocide Coalition, and founded SHEM: the Student Holocaust Education Movement. “I was drawn to the Jay and Jeanie Schottenstein Honors Program, whose academic rigor and opportunity to work with a faculty member on a senior thesis greatly appealed to me,” said Goldberg. Interactions with faculty proved to be a deeply meaningful aspect of his college experience.

“I remember sitting in Rabbi Jacob J. Schacter’s course on the evolution of Jewish memory across time and being in absolute awe of his passion and brilliance,” he said. “It’s the kind of moment I think every college student experiences at least once: that moment when you know you’ve found a mentor—someone whom you deeply admire and respect, who shares a fire similar to the one burning in your heart. I left that class changed.”

Goldberg will go on to change many others. Next year, he will move to Hong Kong to teach Jewish Studies at Elsa High School, a Jewish international school, and help develop the first Holocaust Center in Asia.

His advice to graduating high school seniors? “Find a cause you deem worth fighting for and go fight for it. If it doesn’t exist on campus, create it. There are willing eyes and ears here, and great opportunities to lead and inspire.”

Miriam Gofine of Toronto, Canada, majored in psychology. During her time at Stern College, she tutored in the Stern College Writing Center and was involved with the Political Science Club and the Tolerance Club. She also pursued high-level psychology research as a cognition lab manager at Yeshiva College and a research assistant on groundbreaking studies at YU’s Albert Einstein College of Medicine, including the Longevity Gene Project. “I think my experiences and responsibilities here, whether they involved neuropsychological testing or memory experiments heavily related to cognition, are ones that wouldn’t have been available to me anywhere else,” said Gofine. “They helped me secure internships and job opportunities.”

She felt the same way about the diverse student body at Stern College. “What’s so valuable about YU is how it brings Jews from around the world to the same place at a transformative time in their lives,” she said. “I learned what it means to be a Jew in countries around the globe, with different cultures and different experiences and brought my own international background into the mix. And at Stern, New York City truly is your campus—so that social diversity expands exponentially.”

Benjamin Abramowitz, of Miami Beach, Florida, majored in English and cognitive science at Yeshiva College. During his time at YU, he was editor-in-chief of The Commentator, Yeshiva College’s student newspaper, undersecretary general of YU’s Model United Nations conference, a fellow in YU’s Benjamin N. Cardozo School of Law’s Undergraduate Fellowship in Political Theology and a CJF community volunteer in Muchucuxcah, Mexico, among other things. Next year, he will be managing a biotechnology company in midtown Manhattan and ultimately hopes to pursue a joint degree in law and journalism.

“No other college could offer me the resources, attention and community to empower me with a profound awareness of the world’s needs,” said Abramowitz, noting that the opportunity to serve as a newspaper editor-in-chief had made a particularly deep impression on him.

“When friends, students and faculty members would approach me to critique or compliment my articles in The Commentator, I felt I was able to witness firsthand my own impact on the community’s thought and discourse.”

Like Goldberg, Abramowitz was drawn to the honors program, which awarded him a full merit scholarship. Yet he felt the most important achievements of his undergraduate years were in the field of character development. “What makes me profoundly proud to be part of this crew are the people we’ve pushed one another to become.”

Daniel Rosen of Teaneck, NJ, majored in biology at Yeshiva College. His honors thesis focuses on mycoplasma and lung cancer. As an undergraduate, Rosen also served on and eventually became the chair of the newly-formed Honors Council. “Yeshiva University has literally been the best of both worlds for me,” he said. “I was able to learn Torah from innovators in Tanach and Gemara, world-famous roshei yeshiva and professors who defined their respective biblical fields. At the same time I conducted top-level science research with a personal research mentor and obtained a Roth Fellowship last summer, through which I was able to do research at Einstein.”

To make his attendance possible, Rosen received a Golding Scholarship to YU, which also helped him pursue another potential graduate degree. Next year, Rosen will attend Harvard Medical School.

“I’d encourage high school seniors to come to YU because it will help you get into any graduate school you want, and most importantly, you will absolutely love your time here,” he said. “I made a very tough decision to come to YU, and I am so happy that I did.”