Yeshiva University recently had a flurry of well-known and dynamic personalities who came to campus to speak and inspire YU faculty, students, friends, and, of course, alumni.

On May 2nd, Dr. Edward Glaeser, Professor of Economics at Harvard University, headlined the annual Alexander Brody Memorial Lecture. He spoke on “Triumph of the City: Why Cities Are Our Best Hope for the Future,” in which made an informative case for the expansion of cities citing economic and historical statistics and examples. 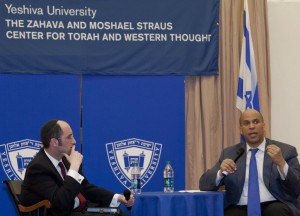 Mayor Booker, who received his honorary doctorate from YU at the 2010 Hanukkah Dinner and Convocation, returned to YU to speak with Rabbi Dr. Meir Soloveichik on “The Role of Religion in Education in Public Life” as a guest of the Zahava and Moshael Straus Center for Torah and Western Thought.

Mayor Booker’s appearance was the final installment of this year’s Great Conversations Series hosted by the Straus Center. Mayor Booker and Rabbi Soloveichik’s conversation concerned Booker’s personal faith and how it influences his daily life, and included many religious-themed anecdotes of major historical figures like the Reverend Dr. Martin Luther King Jr. and Ghandi.

“Cory Booker is inspiring,” said Stern College for Women alumna Adina Schwartz. “When I heard he was speaking at YU, I had to see him in person and he did not disappoint. He was smart, funny and offered some valuable insights.”

M. Gary Neumann, the best-selling author who was frequently featured on The Oprah Winfrey Show, appeared at an event co-hosted by the Alumni Councils of Ferkauf and Wurzweiler. He gave a talk entitled “The Secrets of Men and Women: Creating Better Relationships.” 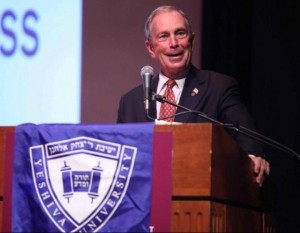 Mayor Michael Bloomberg attended the 2012 Annual Sy Syms School of Business Gala Awards Dinner held at the Museum of Jewish Heritage in early May. The event celebrated the 25th anniversary of the creation of the business school, which now has over 3,000 alumni. Ever the champion of New York City, Mayor Bloomberg urged soon-to-be graduates to begin building their careers in the Big Apple. He declared, “You have the kinds of skills, desire and drive that this city, one of the most diverse cities in the world, needs. Your education has given you all the tools you need to succeed.” 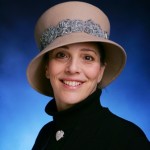 Finally, some of YU’s very own superstars: Professor Smadar Rosensweig, who teaches Bible at Stern College for Women, was the final speaker in the alumni affairs spring 2012 lecture series. She spoke on May 10th on “Loss, Love, and Loyalty: Why Do We Read the Book of Ruth on Shavuot?” The event was hosted by Daniel Riemer ’05YC at Kaye Scholer LLP. Rabbi Dr. Jacob J. Schacter, University Professor of Jewish History and Jewish Thought and Senior Scholar at the Center for the Jewish Future, will kick off the Summer Lecture Series on Thursday, June 14th, with a talk on “Commemorating Communal Catastrophe: The Fast of the Twentieth of Sivan and the Holocaust.”