Improving the Welfare of Humanity: YU Service Mission to Haiti

This article was written by guest contributor  Adam Berman ’11YC, who recently helped lead a humanitarian program to Haiti sponsored by YU’s Center for the Jewish Future. Below, he writes of his experience in visiting the country that is still recovering from the massive earthquake in 2010 and is rife with poverty and political instability.

In June 2012, I had the privilege of co-leading a Yeshiva University Center for the Jewish Future humanitarian service mission to Haiti run in partnership with the American Jewish Joint Distribution Committee (JDC). While Haiti has faced countless hardships for decades, the magnitude 7.0 earthquake that ravaged the capital in January 2010 thrust the country into a humanitarian crisis almost beyond imagination. Since the earthquake, hundreds of aid organizations have been active in Haiti, but numerous challenges remain. Because of the current situation on the ground and the opportunity to engage in meaningful service, I journeyed to Haiti with an eager group of 16 Yeshiva University students and two fellow staff members for an experience of a lifetime.

From the moment we arrived, it was clear that Haiti was unlike any other place I had ever been. The airport terminal, housed in a temporary structure awaiting the completion of a new building, was hot and cramped. Wall-fans were our only source of respite from the hundred-degree heat. After making our way through customs and packing onto our bus, we began a tour of Port-au-Prince, the densely populated urban center devastated by the earthquake. Throughout our ride, my heart was continually torn as young children and adults repeatedly approached our vehicle to beg for food and water.

The country’s destruction was apparent. Rubble still lined many streets and rickety tents used as temporary “homes” for the last two years were strewn everywhere from public parks to designated tent-city zones. Buildings that survived the earthquake showed deep stress fractures, and the Presidential Palace, once a beautiful site, was destroyed, standing with much of its interior exposed to the elements.

After the shock of disbelief turned into my reality for the next seven days, I began to take in the beautiful Caribbean colors adorning buildings and advertisements. Surprisingly – at least to me – people walking the streets often displayed glowing smiles as they went about their daily affairs. In a country with more than 80% unemployment, limited access to healthcare, and countless other challenges, it was hard for me to imagine myself smiling under such circumstances. 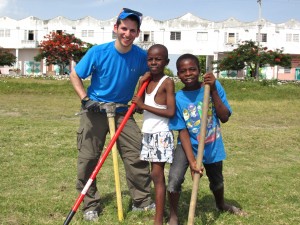 My role on the program was to serve as the educational director, leading the Torah learning sessions each night to help frame our experience from the Jewish vantage point. I believe wholeheartedly that the Jewish people have an obligation to ensure the welfare of humanity at large. While we must maintain priorities that focus on building a vibrant and healthy global Jewish community, this ethical obligation – emerging from the Tanach, the Talmud, and Jewish philosophy – motivates me to engage in service for both Jews and non-Jews alike. Being in Haiti and seeing the tremendous need caused me to pause and reflect upon my role as both an individual and as part of the greater Jewish community in working to improve the quality of life for people around the world.

We began every day by running educational programming for school children, ages 3 to 16, in a large concrete building in downtown Port-au-Prince. From the moment we arrived, we were welcomed warmly by the children who readily gave us hugs and “slapped us five”. From self-descriptive art projects, to a science day, to a health workshop, it was amazing to see how eager they were to learn – even in the exhausting heat of their dimly lit and poorly ventilated basement-level schoolhouse. Every day ended with song, dance, and lots of laughs, connecting our different worlds in a tangible way.

After each school day, we worked to repair Heart to Heart’s community medical clinic, a facility that provides basic medical care to hundreds of people each week. Our group removed debris, painted much of the clinic, and helped build a physician’s consultation room. The labor was both intense and fun, helping us feel accomplished at the end of each day. 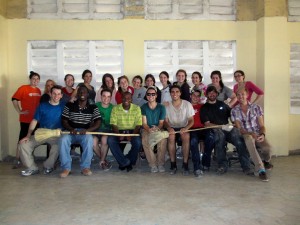 On our final day of service, our group drove 30 minutes outside Port-au-Prince to a town called Zoranje to put the finishing touches on a community soccer field that a group from the JDC had built six weeks before our arrival. Under the beautiful (and hot) afternoon sun, we worked together with the local community to clear garbage, remove shrubbery, and level parts of the field. We finished the day with a game of soccer – team YU versus the local community – in which we valiantly fell 1-0.

Over the course of our week in Haiti, what impacted me most was our time spent interacting with the local people. Each person I spoke with – whether a school child or an adult – expressed a deep desire for a better future. To me, more important than the physical contribution we made in Haiti was the feeling of solidarity we brought and the desire to improve the status quo as equals in the process. We came not looking to impose our own ideals, but rather to learn from the people of Haiti and to work with them as partners in creating a better future. Our group’s presence and hard work helped bring feelings of hope to those with whom we interacted, empowering them to be active in their country’s progress.

As an alumnus of Yeshiva University, I can say with confidence that this service mission embodied the ideals I gained as both a student in the beit medrash and in my secular studies. My rabbis and professors helped me reinforce that the entire world and all people who inhabit it have tremendous value. The recognition that we are part of a global matrix – far larger than our rural or metropolitan Jewish communities – motivates us to be active in the world rather than withdraw from it. The Jewish people, as the embodiment of God’s treasured nation, must engage the world fully in pursuit of a more perfect existence. As a leader on this service mission, I had the privilege to connect with a diverse group of inspiring students, helping them recognize their potential in achieving meaningful change through acts of chesed for those in need.