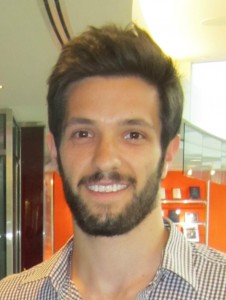 Though he was busy balancing a rigorous dual curriculum, a stint as a tutor for the Yeshiva University Writing Center, and taking advantage of all the athletic amenities available at YU, Neil Goldman ’08YC often tuned in to The Charlie Rose Show in his dorm room late at night.

“My grandparents introduced me to the show when I was in high school,” Goldman explains. “I watched Charlie’s conversations with Robin Williams, Conan O’Brien, Richard Avedon and Henri Cartier-Bresson. To me, it was one of the few places on TV where you could hear these cultural icons discuss their work in depth.”

When Goldman was set to graduate YC, he made a list of potential dream workplaces, including Charlie Rose, The New York Times, the New Yorker, and, because he is a devoted athlete, the NBA. He said, “After looking at the list, I realized that Charlie Rose appealed to me the most. I was curious about broadcast journalism, and Charlie Rose was the perfect fusion of academia and entertainment, intellectually stimulating while still being part of the public conversation. I applied for an internship and began working there that August.”

Goldman had looked into internships as a sophomore, but found that the dual curriculum and the extensive amounts of class time it entailed made it too difficult for him to take on an intensive media internship. Originally from Englewood, NJ and a graduate of the Ramaz School, Goldman majored in English at Yeshiva College, a natural extension of his longtime love of reading and writing. “As it turns out, YU is a particularly great place for an English major,” explains Goldman. “The centrality of texts that is integral to a Judaic studies education proved extremely useful on the non-Judaic side. Whether or not I knew it at the time, the Talmudic hairsplitting and ‘why-this-word-and-not-that-word’ analysis of Biblical commentators, like Rashi, helped me analyze the stuff I was reading in my lit classes.”

His time tutoring students at the Writing Center also helped hone his skills. “Students would come in, and in 45 minutes you had to be able to assess priorities and it is this exercise that I find very useful in my job today,” said Goldman.

Goldman did find time to serve as a research assistant to Paula Geyh, associate professor of English. “Professor Geyh was a great mentor to me and deepened my appreciation of literary theory,” says Goldman. “As her research assistant, I was able to proofread parts of her book, an experience which was easily among my most meaningful as a student at YU.” Other favorite teachers include Professors Alana Newhouse, Hayim Sober, Elizabeth Stewart, and Gillian Steinberg.

After his internship at Charlie Rose, which lasted a year, Goldman quickly moved up the ranks to become an editorial assistant in 2009, and, in November 2011, an associate producer.

If it’s showtime, meaning a day on which a show is being produced, Goldman typically spends the day proofreading and editing the “prep” paper, a 10-15 page brief for Rose on that show’s guests and the projects they are currently promoting; writing the script for the show; and ensuring any relevant clips from the guests’ movies or previous Charlie Rose appearances are ready to be aired. Goldman also greets each guest and any accompanying entourage. “That part is always a lot of fun – you get to see who really has star presence and you get the inevitably hilarious hello with the guest, when an introduction is not really necessary,” laughs Goldman. “For instance, ‘Hi, I’m Neil. I work with Charlie. Hey, I’m LeBron James. Nice to meet you.’ Oh, you’re LeBron James? I thought the other guy was LeBron James…).”

A day when Goldman is not producing a show involves booking guests for upcoming episodes; researching the upcoming booked interviews; pitching ideas to Rose; and attending movie screenings, as well as generally keeping abreast of what’s happening in the entertainment world.

Though Goldman’s job seems alluring when compared to the usual mundane office tasks, “there is probably no job that is as glamorous as it’s portrayed to be, and working in television is no exception,” he says. “Speaking from my experience, there is a lot of menial work that accompanies the sexier parts of the job. The biggest challenge of my job is putting together thoughtful, intelligent shows in often less-than-ideal time frames. The greatest reward of the job is the curatorial pleasure of shaping these interviews and seeing them come to life on-screen.”

Goldman’s favorite meetings include Adam Sandler; Willie Mays, the baseball legend, whom Goldman met along with his father, a longtime fan; Wes Anderson, one of Goldman’s favorite directors and a guest on the first show he produced; and the “Ocean’s” boys: George Clooney, Brad Pitt, and Matt Damon, whom Goldman assures any female readers out there, are indeed as good-looking in person as they are on-screen.

As an alumnus, Goldman has returned to YU several times, often to speak to current students about his career. The most important career advice, he says, is cliché but true: find something you love and get close to it. Explains Goldman, “It’s easy for an employer to argue with intelligence and turn down someone who is very qualified, but it is difficult to argue with passion. More doors seem to open to people who are genuinely excited about the things they are applying for. To those who are looking to go into television specifically, I would tell them: find a broadcast journalist or a program you like and try to get a foot in the door there.”

He continues, “I come back when I am invited to discuss my career to remind students that you can go to YU and be something other than a doctor, lawyer, accountant, or banker – ‘not that there’s anything wrong with that,’ as Seinfeld would say. I also return out of gratitude. Yeshiva was a step along the path that led me to where I am now, and I’m grateful for it.”