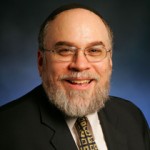 Dr. Ephraim Kanarfogel is the E. Billi Ivry Professor of Jewish History at Bernard Revel Graduate School of Jewish Studies and at Stern College for Women. One of the foremost scholars in medieval Jewish history and rabbinic literature, he is a lifetime fellow of the American Academy for Jewish Research, a winner of the National Jewish Book Award for Scholarship, a two-time winner of the Samuel Belkin Literary Award, and a three-time fellow at the Center for Advanced Jewish Studies at the University of Pennsylvania. Professor Kanarfogel has authored or edited five books and published more than 75 articles and reviews. His latest book is The Intellectual History and Rabbinic Culture of Medieval Ashkenaz, published by Wayne State University Press.

1. What did you do before you joined YU as a faculty member?
I was a student at YU (high school, college, semicha, kollel, PhD).

2. What is your favorite aspect of your job at YU?
Part of the reason that I like working at Yeshiva is that my job has a wide variety of aspects, all of which I enjoy. From the classroom teaching, to helping students to chart their academic careers, to the opportunity to travel far and wide for academic conferences and research, it’s all just a lot of fun.

3. What profession other than your own would you like to attempt?
Railroad engineer, or a keyboard player in a band.

4. What is your goal as a Jewish historian and scholar, and what is your goal as a teacher?
On the scholarly side, I would like to continue to expand the corpus of contemporary historical analysis for medieval and early modern Europe, based especially on the rich resources in manuscripts that we have only begun to tap. For my graduate and doctoral students, I would like them to become independent scholars in their own right, who can conduct research and teach at the highest levels. For my undergraduate students, I would like them to acquire the methodologies and interest to pursue a lifetime of Torah study and scholarship from within the primary texts, as consumers of those texts and not merely as passive learners.

5. What would your current and former YU students be surprised to learn about you?
I do sleep more than two to four hours a night.