Faculty Fast Facts Light Up Your Chanukah with YU 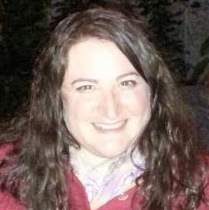 Judith Kaplan ’03S was always an artistic child and teenager. Growing up in Brooklyn, Judith took many extracurricular art classes as an elementary and middle school student at Yeshiva of Flatbush, and as a high school student at Stella K. Abraham High School for Girls (SKA). When it came time to decide where to attend college, Stern was her top choice because of its art program, where Judith was able to major in art, attend classes at the Fashion Institute of Technology, and complete a BA. “Most art schools only issue BFAs,” she explained. “I didn’t want to miss out on the opportunity to study really cool subjects that would not be offered in a strictly art school.”

Her 3 ½ years at Stern were spent on track toward a career in set design, and Judith helped to design and construct the scenery for such Stern productions as “9 Girls” (1999) and “The Mouse Trap” (2000). But during the interview process at the Tisch School of the Arts during her senior year, where she hoped to study for a graduate degree, Judith soon realized that it would be impossible to work on larger stages in New York City and manage to live a Shabbat-observant lifestyle. She spent the next few months exploring various fields in which she could apply her talent in the arts until a friend suggested she apply for a position in the fashion industry. Judith worked as the executive assistant to the head of production at a small childrenswear company; after a month, she was given the opportunity to work in product development.

Judith moved on to an internship at Zac Posen, where she nurtured her experience in a luxury brand and was able to explore womenswear. The experience led to a position at Ralph Lauren in 2009 in boys knits, where she launched an activewear line and was promoted to product manager of the girls wovens department last year. Today she oversees the development of all girls’ woven clothing for Ralph Lauren Blue Label.

As a manager in product development, Judith and her team take a garment from a designer’s vision and sketch on a piece of paper to the product you see hanging in stores in a way that both represents Ralph Lauren’s brand, and is sellable and profitable for the company. She spends her days working creatively with various partners on the RL team: fabric and trim experts, factories, technical designers, merchandisers, planners, and the designers – all of whom Judith coordinates to make each item of clothing that Ralph Lauren releases. It’s a labor-intensive and painstaking process; if, for instance, the garment cannot be produced within budget, Judith must resourcefully find a way to make it work.

Though the fashion industry is known to be demanding with round-the-clock hours, Judith has been able to find a balance between her life as an industry professional and an observant Jew. Though she uses the majority of her vacation days for chagim, she has been lucky to work with supervisors who understand that she needs to leave early for Shabbat during the winter and who allow her the flexibility to make up those hours, as long as the work gets done.

A current resident of the Upper West Side, Judith is active in the Young Leadership Committee at The Jewish Center, and recently participated in their membership drive. Yeshiva University also runs in her family: her father, Robert, is a 1972 graduate of Yeshiva College, and her mother, Susan, is a 1975 Stern graduate. Judith’s sister, Professor Debra Kaplan, is also the Dean Pinkhos Churgin Chair in Jewish History at YU. (Judith has another sister, Cindy, who lives in Los Angeles.)

Though a career in fashion was not what Judith initially envisioned for herself when she began her studies at Stern – she didn’t even take any fashion classes while completing her joint studies at FIT – she credits the school with her arts training and helping her to cultivate some very important skills. “My job is extremely detail oriented, and one of the greatest skills I learned while doing the joint program at Stern/FIT was how to pay attention to details.”

Judith also takes with her some valuable life lessons from YU that she relates to her career. “I learned a lot about organization and time management while at YU. One of the first things I learned (the hard way) during my freshman year was that one cannot cram when it comes to art. Spending time in the studio working little by little is the only way to create something. I apply this daily to both my team and my own workload. Things move and change really fast in Fashion. I attribute a great amount of my ability to maintain the pace on my ability to organize and manage time.”