40 Years in Service to the Jewish People: Paul Glasser ’73YC

We all know of the old joke involving two Jews and three opinions, making Jewish communal work – which involves negotiating the opinions of many different Jews – anything but for the faint of heart. It requires a level head, a good-natured disposition and strong interpersonal skills. After nearly 40 years of working on behalf of the Jewish community, and many high-level positions with various Jewish organizations and institutions, Paul Glasser ’73YC, of Teaneck, NJ, is something of an expert. 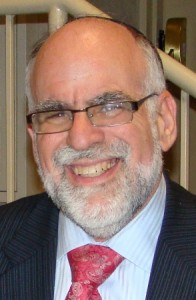 Jewish communal work wasn’t always a career Glasser planned to pursue, but as a public school student from a non-observant background growing up in Queens, NY, his involvement with NCSY, the youth movement of the Orthodox Union (OU), instilled in him a love for making a difference in the Jewish community. His growing observance led him to attend Yeshiva University’s James Striar School of General Jewish Studies (JSS), which is now more commonly known as the Mechina Program. He continued with NCSY, serving as a national advisor, throughout his years at YC/JSS.

“All the students in JSS were from similar backgrounds, so there was an immediate connection and we all formed very close bonds,” recalls Glasser. “Many of those friendships continue to this day.” Glasser majored in music, and upon graduation in 1973, he was immediately recruited by YU to serve as the assistant to the director of admissions. After assuming the top post in 1979, he created (with the assistance of senior vice president Rabbi Dr. Israel Miller, z”l) one of YU’s most well-known programs: the S. Daniel Abraham Israel Program, which formed an official, legal relationship between YU and many different yeshivot and seminaries in Israel that yeshiva high school graduates commonly attend before coming to YU. “That was my most exciting contribution to the Jewish community during my time as YU’s admissions director,” says Glasser.

While working at YU, Glasser spent some time living on the Beren Campus in midtown Manhattan with his wife, Rachel ’74S, who served as the director of the residence halls at Stern College for Women. This officially made the Glassers one of the first “campus couples” who live on campus – albeit, now, only on the weekends – to provide Shabbat student programming. (The current campus couple is Jonathan Schwab ’11YC, Assistant Director of Communications and Recruitment for the Admissions office, and his wife, Esti Rollhaus ’10S, a student at the Icahn School of Medicine at Mount Sinai). In 1982, Glasser was recruited to become the executive vice president of Beth Jacob Congregation in Los Angeles, one of the largest Modern Orthodox synagogues in Southern California. In 1988, he founded his own small event planning and PR firm, Creative Resource Group, and ran major events and marketing projects on behalf of various Jewish communal organizations and institutions. One of the company’s projects was sponsoring a Passover program in Phoenix, which is know today by the name VIP Passover and takes place at the Arizona Biltmore. It has become one of the most popular Pesach programs and has welcomed many YU scholars, personalities and well-known alumni to deliver shiurim to the guests. (This year’s roster includes President Richard M. Joel; Rabbi Dr. Jacob J. Schacter, University Professor of Jewish History and Jewish Thought and Senior Scholar for the Center for the Jewish Future; and YC/RIETS alumnus Rabbi Steven Weil, executive vice president of the Orthodox Union.) In 1996, Glasser experienced a homecoming when he was invited back to New York to serve as the national executive director of NCSY, where he worked until 2001 before becoming the executive vice president of the American Committee for Shaare Zedek Medical Center in Jerusalem. In the 10 years that Glasser was responsible for fundraising in the United States for Shaare Zedek, he and his professional team raised more than $180 million. Finally, in 2011, Glasser returned to the OU, this time as the senior director for institutional advancement, where he has responsibilities in development, communications, the supervision and management of various administrative tasks, and the mentoring of the younger staff members. In addition, Glasser serves as a professional cantor, and regularly leads Rosh Hashanah and Yom Kippur services at the Young Israel of Kew Gardens Hills.

As his Yeshiva College 40th reunion is this year (the celebration takes place on May 25th), Glasser has added one more role to his portfolio; member of the Reunion Committee. “I am excited to attend the reunion and catch up with old friends,” he says.

Inspired by their father’s example, Glasser’s children, all YU graduates, each hold a position in the Jewish community: his son, Rabbi Yaakov Glasser ’99YC, ’01RE, ’05AZ, is married to Dr. Ruth Glasser, and serves as Regional Director for New Jersey NCSY and rabbi of the Young Israel of Passaic-Clifton; his son, Moshe ’05YC, ’07AZ, is Department Chair of English at Mesivta Yesodei Yeshurun and is married to Elizabeth Ravkin, ’07S, a member of the science faculty at Stern College; and his daughter, Shana ’01S, ’02W, was until recently the Stern College Associate Director of University Housing and Residence Life and just celebrated her marriage to Howie Beigelman ’91YUHS, ’94YC. Glasser’s wife, Rachel, is currently the school librarian at Yavneh Academy in Paramus, NJ, a position she has held for the past 16 years.

Glasser is also a longtime friend of President Joel, as the two were involved in YU’s Torah Leadership Seminars at the same time in the early 70’s.

President Joel states, “Paul Glasser is an extraordinary son of Yeshiva, who, through his long career of service to the Jewish people, has always had YU in his heart and in his mind. His work as Director of Undergraduate Admissions at Yeshiva was stellar, and he has gone on to positively affect thousands of people in New York, Los Angeles and globally in his work for the Jewish people. The most important gift that Paul has given is that all of his children are Yeshiva educated and continue in the fields of Jewish education and community work. The family continues to make their alma mater proud.”

Reflecting on his career thus far, Glasser suggests that one of the main challenges in Jewish communal service is striking the right balance between the professional and lay leadership. “The partnership between the two is essential to helping an organization flourish,” he explains. “It’s not always simple, as there are many different personalities at play, but as long as everyone remembers to work for the goal of the team, rather than the individual, it’s easy to stay on course.” Glasser also lists strategic planning and effective communication as key components of success in running a Jewish organization.

He continues, “Of the many benefits in working for the community, my favorite has been meeting the most wonderful people in the world, who are generous with both their time and money, and who are deeply committed to our way of life and making a difference for the Jewish people.”