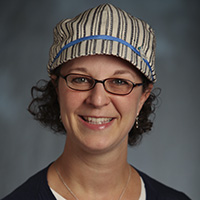 Professor Gillian Steinberg, an associate professor of English and Director of English Composition, is a graduate of the University of North Carolina, Chapel Hill. She holds an MA and PhD from the University of Delaware. At Yeshiva College, she directs the composition program in addition to teaching courses in writing and literature. Her main academic interests are modern poetry, composition, literature pedagogy, and twentieth century short fiction. She is the author of Philip Larkin and His Audiences.

1. What did you do before you joined YU as a faculty member?
Teaching at YU was my first job after graduate school, which I began right after I was an undergrad, so I’ve pretty much always been in an academic environment. I was so excited to get this job and move to New York, and it’s been an amazing experience ever since.

2. What is your favorite aspect of your job at YU?
Working with smart, motivated, interesting, thoughtful students is absolutely the best part of this job; luckily, almost all of our students fit that description. I also love teaching students who think they don’t want to study English and having them tell me at the end of the semester that they love it (or, at least, that it’s not as bad as they thought it would be).

3. What profession other than your own would you like to attempt?
I’ve wanted to be an English professor since kindergarten, so it’s hard to think of any other career possibilities. I used to be the music director of a student theater company, and I guess that doing something like that – playing piano and working with musical theater actors – would be a fun alternative.

4. What is your goal as an author (or literary critic), and what is your goal as a teacher?
As a literary critic, I aim to focus readers on the poetic texts themselves rather than some of the peripheral matters that often distract readers from the texts (like poets’ juicy biographical details). I hope that my writing is accessible enough to be meaningful to casual readers while still participating in an ongoing scholarly conversation, and I hope it offers people compelling ways to read poetry that they had not fully considered before.
As a teacher, my goals are similar: to strike a balance between accessibility and challenge; focus on the heart of the matter; open students’ eyes to new possibilities for approaching the world; and show them that reading and writing are equal parts fun, practical, and life changing.

5. What would your current and former YU students be surprised to learn about you?
A lot of students know that I’m a big sports fan, but they might not know that I used to camp out in the parking lot of the Dean Dome to get tickets to UNC-Duke basketball games, back in the days of Jerry Stackhouse and Rasheed Wallace, as well as Grant Hill too. Those were good times, but I’d still choose teaching at YU over being back at Carolina any day.