The theme of Bridging Generations ran through the community-wide Yom Hashoa Program at Beth Jacob Congregation in Beverly Hills on Sunday night, April 7.  The annual event, sponsored by the David and Fela Shapell Family Foundation Institute on the Shoa U’Gevurah at Yeshiva University and Ernie and Regina Goldberger, featured a multi-media contest for local teens, a performance by the Shalhevet High School choir, and a keynote talk by renowned storyteller, Professor Peninnah Schram of Stern College for Women, Yeshiva University.

The evening began with the Shalhevet choir accompanying the lighting of the 6 candles to represent the 6 million Jews who perished in the Holocaust.  The candles were lit by community leaders and Holocaust survivors and their descendants  including Jack and Gitta Nagel, David and Fela Shapell, Alice Schoenfeld, the Feder family and the Adler family.

The winning submissions of the multi-media contest were then displayed/performed for the audience.  The contest asked teens to focus on their own responsibility to pass on the stories of the survivors of the Shoah.  As the last generation to personally know the survivors, teenagers of today have the unique opportunity and responsibility to be the link to future generations.  Submissions were accepted in video, art and written form.  The three winners, who received cash prizes of $250 and public performance at the event, were Ariel Amsallem from YULA Boys School (a poem), Jordan Lustman from YULA Boys School (video) and Rachel Sentchuk from Shalhevet High School (video).

As the keynote speaker, Professor Schram spoke on the topic of Stories from the Shoah: Keeping the Voices Alive, touching on the theme of the audience responsibility to pass on the stories of the survivors and learn from their lives, not just as survivors, but from their lives before the Holocaust as well.  Professor Schram had the audience mesmerized as she told stories from the Holocaust as well as survivor stories.

Click on the image below to see the full sized program flyer. 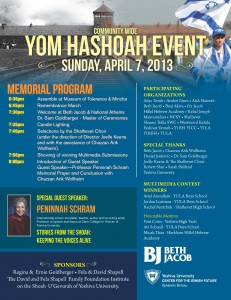