From an Idle Summer Day, a Neighborhood Tradition Grows

Nearly 20 years ago, on a lazy, summer day, four bored teenagers spontaneously decided to ride their bikes through Pikesville, a Baltimore neighborhood, to play a series of basketball games. They called it Tour de Court. 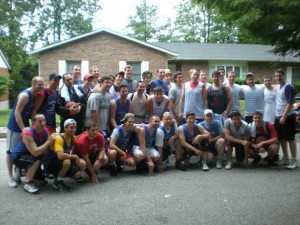 That idea became an annual tradition, as those players – and the many more who have joined since then – return to Baltimore each year for the 3-on-3 basketball tournament (known more informally as TDC), which also attracts spectators ranging from family and friends to general basketball fans. TDC has also developed a charitable focus as players raise money for various causes.

One of those teens who originated TDC is Jon Minkove ’02YC, an attorney who currently lives in New York and who also serves on the event’s executive board. (Jon’s parents, Dr. Judah and Judith Minkove, are also YU graduates.) Members of the board spend hours determining rules and procedures; finding potential basketball courts to include in the tournament; and helping to raise funds. The past few years, TDC players have been raising money for the Leukemia & Lymphoma Society, to support Jon’s sister, Rachel Minkove, who had been diagnosed with Hodgkin’s lymphoma.

Rachel, whose goal was to become a hospital oncology social worker, endured her battle with Hodgkin’s for several years. She lost that battle the week after last year’s tournament, which raised nearly $15,000 for the Society to support a Hodgkin’s Lymphoma Research Portfolio in her memory (the Society allows for any funds exceeding $10,000 to be earmarked for a specific disease research portfolio).

“My sister was just an all-around great person,” said Jon. “She was so determined and positive, even when she got sick, and her upbeat nature inspired everyone around her. If she wasn’t down, we weren’t allowed to be either. Remaining positive and hopeful was how she always lived her life.”

“As her friend for years, I frequently saw that she just had this way of making others feel happy,” recalled Noam Weissman ’08SB, a Baltimore native and a longtime TDC player and board member. “She was one of the most genuinely good people I’ve ever met.”

Weissman, who currently lives in LA and is the Principal of Judaic Studies at Shalhevet High School, is planning to return to Baltimore for TDC, as he does each year since he’s lived outside the area. “The tournament is a really great way of making sure all of us who grew up together keep in touch and still find time to hang out with one another, even though we no longer live near one another,” he said.

This year, the goal is to raise $25,000 in Rachel’s memory. The tournament is also dedicated to Mel Pachino, a former player and friend of TDC who suffered severe neck injuries while he was hit riding his bike a few weeks ago. Mel is the father of Rebecca Pachino ’08S.

Nearly 50 players, ranging from adolescents to middle aged, will participate in the tournament on June 30th.
To become a TDC player is no easy feat: aside from having a longstanding relationship with the Baltimore area, aspiring participants need to be as outrageous and wacky as possible on their application. Moderate basketball skills won’t hurt chances, either.

Said Weissman, “The best part of TDC, aside from the money we raise, is simply the banter that goes on beforehand among all of us who are planning it. This is the most ridiculous group of guys I’ve ever been associated with and I love us for that.”
“TDC was really just a crazy idea my friends and I had years ago, and it remains a fun and ridiculous kind of reunion that we look forward to all year,” Jon explained. “But now it has also become a tremendous opportunity to raise money for causes that need our support.”

Those who would like to contribute to this year’s tournament can do at www.tourdecourt.org.