These esteemed science institutes and academic programs can all claim David Kastner ’05YC, an MD/PhD candidate in neuroscience from Stanford University, as a student or researcher.

Now the École Polytechnique Fédérale de Lausanne, or EPFL, in Lausanne, Switzerland, will be added to the list. Kastner, who was just awarded his PhD, has also been awarded a prestigious Fulbright Scholar Award to support a year of research at the EPFL for the 2013-14 academic year. He will receive his MD from Stanford in the spring of 2014. 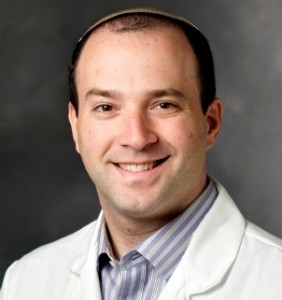 Kastner, originally from Teaneck, NJ, applied only to Yeshiva College while in high school. “I had always attended a Jewish day school, and the idea of continuing to combine my Jewish and secular studies at college was very attractive to me,” he said. Thinking he would become a physician, he began pre-med studies, but majored in English because he has a longstanding interest in literature.

“I had a wonderful experience at Yeshiva and took classes with some really wonderful professors,” said Kastner. Particularly, he cited a writing class with Will Lee, YC associate professor of English, who inspired him, as well as several science courses, especially those taught by Dr. Carl Feit, the Ades Chair in Health Science and Chair of the Yeshiva College Department of Biology, and Dr. Raji Viswanathan, YC Associate Dean and Associate Professor in Chemistry, who herself was named a Fulbright Specialist in February 2013. He also found a spectacular mentor in Dr. Joan Haahr, YC Professor of English Emerita, with whom he took five courses and from whom he first learned of the Fulbright program.

During the summer of 2002, Kastner interned in a laboratory at Regeneron Pharmaceuticals in Westchester, NY. He spent the following summer conducting research with a biological focus at the prestigious Weizmann Institute of Science in Rehovot, Israel. Realizing that his interest in medicine was complemented by an equally strong interest in research, Kastner decided to add a second major in Chemistry in his sophomore year and a third major in Biology during his junior year, as he began to strongly consider pursuing a combined MD/PhD degree. He spent his last summer before graduating YC as a participant in the Summer Undergraduate Research Fellowship Program at The Rockefeller University, where he worked in Dr. Thomas Sakmar’s lab mapping parts of the signal transduction pathway.

Despite his rigorous program of study, Kastner still found the time to organize and volunteer for YC’s Literacy Program, where he tutored students at a local public elementary school. He served as a member of YC’s Academic Standards Committee and YC Senate. As a junior, he won the Barry M. Goldwater Scholarship, one of just 310 students throughout the U.S. During his senior year, while also continuing his work at Rockefeller, he was accepted to Stanford’s rigorous Medical Scientist Training Program, which typically admits 8 to 12 students each year.

His recently announced Fulbright award to study in Switzerland comes as welcome, but not surprising, news to those who know him.

“That David is now doing ground-breaking work on the biophysics and neurobiology of sight is no surprise to anyone who had the privilege of having him as a student in Yeshiva College,” said Dr. Feit, with whom Kastner stays in touch. “His profound abilities as a scholar and his devotion to sophisticated research were already abundantly evident as an undergraduate.”

Kastner will be conducting computational and theoretical research in neuroscience at the EPFL, the Swiss Federal Institute of Technology. EPFL was founded by the Swiss federal government and serves as a national center of excellence in both science and technology. He will be supervised by Professor Wulfram Gerstner, EPFL’s Director of the Laboratory of Computational Neuroscience.

Though Kastner will likely spend most of his time inside the confines of a laboratory, as an avid cyclist he is also looking forward to cycling against the beautiful backdrop of Swiss scenery. After finishing his degrees, Kastner plans to focus his career on the study of neurological and psychiatric diseases, combining research with clinical practice in an academic setting.

Speaking to current YU students who might be similarly interested in pursuing a combined MD/PhD degree, Kastner advised, “Do research, do it thoroughly and do it well. Other than that, take classes, in any subjects, which both challenge and inspire you.”

Kastner’s father, Michael, said, “Ever since he was little, David was interested in how things worked, from doing autopsies on our VCR to building models of nuclear power plants. Yeshiva offered him an environment where he could focus that passion, while studying with a superb and attentive faculty who invested themselves in his success. When he arrived at Stanford, YU had given him the skills to succeed on a grand stage.”