Each summer, hundreds of YU students choose to spend their summers on service missions sponsored by the Center for the Jewish Future, both in the United States and abroad, or working in internship programs that combine professional training and learning. As you will see from their stories, they return with much more than sand in their pockets.

In early June, 10 students participated in a Hurricane Sandy Relief Mission organized by the CJF’s Presidential Fellow, Elana Polster. The mission was co-sponsored by NECHAMA, Jewish Response to Disaster, a non-profit organization guided by the mandate of Tikkun Olam. Students worked to rebuild and revive areas and institutions that were severely affected by Hurricane Sandy, like the Young Israel of Oceanside on Long Island. They met with people whose homes and businesses were ravaged by the super storm, and participated in activities like a panel discussion with the Young Israel of Oceanside’s rabbi, Jonathan Muskat, and a meeting with the UJA Federation of New York. They also volunteered with Masbia Soup Kitchen Network and met with its executive director, Alexander Rapaport. This mission represented a continuation of numerous Sandy relief efforts that YU students have been participating in throughout the year.

Far from New York, 20 students traveled to the Ukraine as part of a service mission co-sponsored by the American Jewish Joint Distribution Committee. They gained a firsthand understanding of the welfare challenges and identity struggles facing the Jewish community of Ukraine following the collapse of the Soviet Union more than 20 years ago. Nearly 500,000 Jews still live in the Ukraine, where many Jewish community centers and several Hillel centers exist. The students engaged in meaningful service projects, such as buying groceries for homebound, elderly people and leading activities for children at a local day camp, as they connected with local Jewish citizens. They enjoyed a Shabbat with the Jewish community in Odessa, and visited the city of Uman, where Rebbe Nachman of Breslov is buried.

Ariella Agatstein ’14S, said of the mission, “It was truly a life-changing experience. We were given real opportunities to engage and develop relationships with the Jewish youth of Ukraine, and to observe their culture and the way they practice Judaism. The highlight of the trip for me was visiting an 87-year old woman, who was sick and bedridden and who told me that her final wish was to visit Yerushalayim. I realized how privileged I am to have the ability to visit Israel any time I want, and how I take it for granted. She really inspired me and I will never forget her powerful words.”

Other YU students were equally inspired by the people they worked with in Israel. Over 60 students are currently participating in Counterpoint Israel, one of the CJF’s most popular programs, working as counselors to teens from low socio-economic backgrounds in Israeli development towns, helping them discover their talents and potential. Camp programs and services include workshops in subjects such as art, sports, fashion, music and breakdancing, as well as lectures and shiurim, to help broaden the teens’ knowledge of Jewish learning. Participating cities this year include Dimona, Arad, Kiryat Gat, Kiryat Malachi and Be’er Sheva. 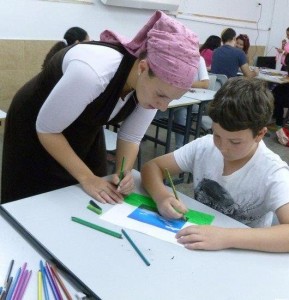 Kiva Rabinsky, co-director of Counterpoint Israel, said, “Following last summer’s successful program, we employed surveys, interviews and focus groups with Counterpoint campers and counselors, as well as municipal and regional professionals, in order to collect data that would conclusively prove that which we always thought to be the true, namely that Counterpoint changes lives.

Research Success Technologies, the company that conducted the research, has the facts and figures to corroborate this experiential knowledge.

“Our findings show that Counterpoint is a transformative experience for campers, with the camps providing a learning environment that is different, and in certain ways even more effective, than the school environment,” said Dr. Ezra Kopelowitz, CEO of Research Success Technologies.

“These summer programs really bring YU’s philosophy of Torah Umadda to life for the participating students,” explained Rabbi Eliezer Mischel, Project Coordinator at the CJF. “Students had the opportunity to gain valuable work experience during the day, and then found the energy to learn Torah and run programs for the community in the evenings and on the weekends. For many, this was their first taste of what it means to be a Modern Orthodox lay leader – and they rose to the challenge.”

One participant in the Kansas City program, Esther Tzvaygenbaum ’14S, worked closely with the CEO of The Urban League of Kansas City, a non-profit focusing on enabling disadvantaged members of the community through education, entrepreneurship, career-building leadership and fostering economic self-reliance. Tzvaygenbaum said, “My internship has been very rewarding and nurtured my interests in non-profit management, community initiatives and education. I worked on finding grant prospects and applying for grants; preparing strategic proposals for the board; heading various PR and marketing initiatives for a new branch of the organization, and sitting in on board and partner meetings. Though the Urban League is a non-Jewish organization, the mentorship and advice given to me by its CEO, Gwendolyn Grant, are certainly applicable and relevant. I plan to use my newly-acquired skills and experience to strengthen Jewish organizations in the future.”