Suri Brody’s (‘00SB) is in Business at Bloomberg 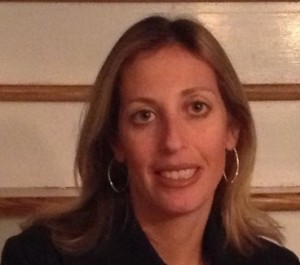 Suri (Brody) Rinzler ’00SB has a high-powered career in finance as a manager at Bloomberg, four children (including 6-month old twins), and no minced words about her dual role: “There is definitely an element of sacrifice,” she says simply. “I cannot be in two places at once, as much as I’d like, and there are times when I miss school functions or doctor’s appointments for my children. I need to look at each personal situation carefully and decide which are important enough for me, at that time, to take off from work.”

“It takes a village, and I am lucky that my own village includes a wonderful husband and nanny who both make sure things run smoothly at home,” she continues. “Bloomberg, and I would hope most other companies, also realizes that working mothers have family responsibilities and does allow me to leave early and work from home when necessary.”

Rinzler, who grew up in Los Angeles before moving to San Diego right before high school, chose to attend Yeshiva University for its rich Jewish life, which included many friends she had made in summer camp and a post-high school year studying in Israel at Machon Gold.

“I am still friends with many of those women today, and our children are great friends too,” she says.

An accounting and finance major at YU’s Sy Syms School of Business, Rinzler credits the school’s eminent reputation – and its appearance on her resume – for her job as a financial analyst in Investment Banking at Bear Stearns straight out of school. There, she was in the Industrial Products & Services group, focusing primarily on Transportation, Logistics & Chemicals. “That job was a really rigorous training ground, and I’ve taken away many valuable lessons from my time there,” says Rinzler. “Details are particularly important in the world of finance and reporting, because numbers are essential and you need to make sure that everything adds up. You should also always ask questions, even if they might seem silly, because you may waste a lot of time on a project only to realize later that you haven’t done what was really asked of you.”

These lessons served her well after Bear Stearns as she moved to General Motors to work in the treasurer’s office as a business analyst, responsible for working on the annual budget, developing internal controls, and managing different projects. In 2004, after two years there, Rinzler moved to Reuters as a Senior Financial Planning Analyst Reporter in the Media Division, where she helped prepare the annual business and marketing plans and budgets, and coordinated quarterly reports to senior management on key business metrics.

Since beginning work at Bloomberg, Rinzler has held three different positions: first as part of the Management Reporting and Analysis Team, then the Business Intelligence Team for Data Solutions Product, and now as the manager for the Process & Compliance Team, which falls under the Global Contracts and Exchanges Department.

Though finance is typically considered a male-dominated field, Rinzler says it really depends on the area within the organization. “On the product side, most managers are men, but in my new role, all of senior management is comprised of women,” she says.

Still, Rinzler acknowledges that finance is a particularly difficult field to break into whether you are a man or a woman, and those from smaller schools like YU need to be as proactive as possible in utilizing connections. “Work with the job placement office, contact as many alumni as you can, and just be persistent,” Rinzler urges. “When I was looking for a job during my senior year, I went to the library and identified as many names as I could at all the mid-tier and large-tier banks, and I faxed my resume to every name on the list. I was once a graduate applying to jobs, too, and I know how difficult it can be to find one, so whenever I am approached I do my best to help graduates to at least obtain an interview at Bloomberg.”

Rinzler primarily stays in touch with YU through LinkedIn as a member of the Sy Syms School of Business and the YU Wall Street Group.

Rinzler is married to Jordan Rinzler, a sales and marketing executive, and they have four children: Ava, 8, Andrew, 3, and twins Carly and Allie. They live in Woodmere, NY.