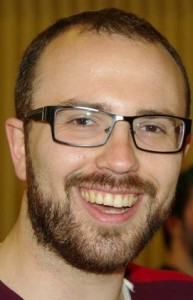 All the world’s a stage, they say, and for some, what goes on behind the curtains is where you can find the real action. For Aaron Roller ’06YC, the Director of Special Projects at the NYC Office of Citywide Purchasing and former Senior Policy Advisor at the NYC Mayor’s Office of Operations, effecting change from the inner workings of urban politics is a dream job.

Roller grew up in Flatbush, Brooklyn, and, during his senior year of high school, spent a great Shabbos at Yeshiva University, and, as a result, decided to attend Yeshiva College.

“I majored in English because, as an avid reader of fiction, I figured this was the major that would interfere the least with my reading,” he explains wryly. “It was pretty short-term thinking, but I don’t think it was a bad decision.”

Roller’s involvement in the YU Arts Festival was a particular highlight of his time at YC, as was the time that Salman Rushdie—whose book, The Satanic Verses, Roller advocated for as part of the annual college book project—came to visit YU in 2004.

“I wanted to show the Beit Midrash to Rushdie, even though he is an avowed and outspoken atheist,” recalls Roller. “It felt important to show him an environment where religious devotion was not tied to violence or hatred. President Joel took my suggestion and, on the way to the auditorium, took Rushdie through the Beit Midrash. I don’t know if it made any kind of impression on Rushdie, but it felt like the right thing to do, and it was the sort of thing that could have only happened at YU.”

Roller also enjoyed close relationships with Professors Elizabeth Stewart and Paula Geyh of the English department and Rabbis Shalom Carmy and Hayyim Angel in Jewish Studies. “One of the great things about a school as small as YC is the relationships that you’re able to build over the course of your studies,” he says.

Roller entered YU with no specific professional aspirations but realized he could turn his deep, enduring interest in how the city works behind the scenes into a career. He found particular help in Dr. Will Lee, who was co-chair of the YC Honors Program at the time and helped steer Roller toward courses and a thesis topic that would be competitively advantageous for graduate school.

Sure enough, Roller was admitted to Harvard University’s Graduate School of Design, where he learned about the NYC Mayor’s Office of Operations from a friend and fellow classmate, Jeff Roth, who had graduated before him and worked there.

“Operations sounded a little vague, but Jeff told me that he got to visit cool places all over NYC, like Water Tunnel #3 and various fire houses,” says Roller. “I told him to sign me up.”

After he received his Master’s in Urban Planning, Roller was hired at the Office of Operations and discovered it was responsible for a diverse portfolio of projects impacting the effectiveness and efficiency of the NYC government, with a focus on enabling the different city agencies—each a huge organization in its own right—to work more effectively together. “It’s almost like an in-house consulting firm,” explains Roller. “We would analyze problems, make recommendations about how to address them, build consensus around a solution and work with stakeholders to implement them.”

One example concerned tree planting permits. In 2008, the City Council had passed a law requiring developers to plant trees on the sidewalks adjacent the properties they were building, but because the Department of Parks and Recreation only issues tree planting permits during certain seasons, developers sometimes found themselves with a finished building ready to be rented out but then couldn’t get a Certificate of Occupancy because they hadn’t planted the trees yet.

Says Roller, “I brought the Department of Buildings and the Parks Department together to find a solution that would shorten the permit process and prevent anyone from being delayed in opening a property because of a tree. By increasing communication and collaboration, we relieved some of the burden and confusion involved in following the city’s regulations while still accomplishing the city’s policy objectives.”

And, though he didn’t have too many interactions with Mayor Bloomberg, Roller was invited to a special reception at Gracie Mansion that recognized staff for their work after Superstorm Sandy. He and his colleagues made sure to dress for a formal occasion, but when the mayor walked in, he was in a decidedly more casual outfit. “As he walked by and shook everyone’s hands, I joked, ‘I didn’t realize this was a casual dinner,’ and he looked at me and said ‘It is for me,’” recalls Roller.

Roller has many accomplishments to be proud of, though he admits operational improvement projects sometimes take awhile to effect tangible change and impact the public. “But right after Sandy, I was reporting to work at the nearest shelter, which was in an elementary school where there was no shower,” says Roller. “When I showed up the day after the storm, the staff found out I was from the Mayor’s Office and asked if I could help find a way for people to get cleaned up. I started calling anyone I could think of who might be able to help and was able to get the Parks Department to bring a van to drive people to a recreation center that had showers. That was an incredibly gratifying accomplishment.”

For students interested in entering city politics, Roller recommends first discovering what they’re passionate about. “In my career, I’ve gotten to work with foresters who are passionate about trees, finance experts who plan the city budget, engineers, programmers, fire fighters and other who are all necessary to make the city run well,” he explains. “The best advice I can give is to find the things that you’re passionate about as an individual and use that as a basis to help serve the public.”

Roller lives with his wife, Shira Rosenbaum, a nurse midwife, and their two children, Avichai, 4, and Kayla, 1 and ½.