How YU Prepared One Student to be a U.S. Army JAG Officer 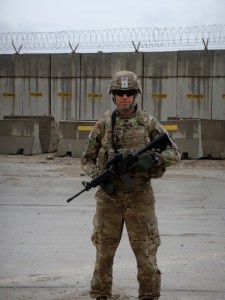 Michael Levin ’05YC, originally from Scarsdale, grew up in a non-Orthodox Jewish home. During a year abroad at Hebrew University in Jerusalem, while he was a student at Dickinson College, he realized just how much he yearned to explore his Jewish heritage and engage in serious study of Jewish texts. When he returned to the U.S., he decided to formalize this desire by attending Yeshiva University.

At Yeshiva College, Levin majored in political science and participated in extracurricular activities like soccer. “I found the political science department to be excellent, especially courses with Professor Ruth Bevan,” said Levin. “More importantly, I found a culture of students who really prioritized their studies and truly loved to learn, which was something I hadn’t seen before. The dual curriculum at YU was intense, but very rewarding.”

As a student at Hofstra University School of Law, Levin—who had always had a desire to serve his country as a member of the U.S. Army—learned about the Judge Advocate General Corps (JAG). “The idea of the dual soldier/lawyer role really intrigued me,” he explained. “It presented a unique opportunity that would utilize the skills I was learning in law school while also enabling me to serve my country. It was the perfect opportunity for me.”

After working as a staff lawyer in the litigation department at the New York firm Schulte Roth & Zabel, Levin was commissioned as an Officer in the Army in July 2012 and became a First Lieutenant in the JAG Corps. He was assigned to the 101st Airborne Division (Air Assault) and stationed at Fort Campbell, which lies on the border between Tennessee and Kentucky. Levin and his wife, Samantha, originally of Lawrence, NY, live in Clarksville, Tennessee, a suburb of Nashville.

Levin recently served a tour of duty at Bagram Airfield in Afghanistan, where he worked on two missions. One mission involved helping soldiers who needed legal assistance and representation, which included defending soldiers facing administrative disciplinary actions. Levin’s other mission had him working to help resolve claims of Afghan citizens against the American government to receive compensation for any damage incurred on their physical and personal property because of the Army’s activities in their country.

“It was a very rewarding experience to serve my country in a combat zone,” said the now Captain Levin. “Being able to serve with the 101st Airborne Division is definitely a point of pride for me.” 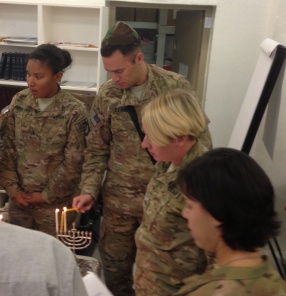 Levin applied his burgeoning connection with his Judaism that he obtained at YU to his army service at the Jewish minyan for Friday night and Shabbat services in Afghanistan (which Levin says received between 10 and 15 soldiers each week), and attended the Chanukah party there. “Many more Jews are connected to their religion in the Army than you might think,” said Levin. “Being in the army, and especially being deployed, help strengthen my Jewish identity. My dog tags proudly state that I am Jewish.”

Though Levin was happy to serve his time in Afghanistan, he admits that being away from his family—especially his wife, who was pregnant at the time—made it a bittersweet experience. Levin was fortunate enough to arrive home in time to see his first child, Isabella Brooke, be born.

Levin keeps in touch with YU, whether he is in Afghanistan or back in Tennessee, by reading the monthly e-newsletters and other e-mail correspondence about the latest events happening on campus.

“At YU, I learned that there are 24 hours in a day and that you have the opportunity to make good use out of every single hour,” said Levin with a laugh. “It certainly helped me realize that idle time is wasted time, and when you’re deployed and working 15-hour days up to seven days a week in a combat zone, that attitude that was instilled in me at YU helped me deal with the intensity.”