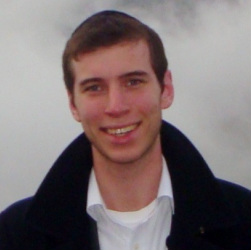 When Mark Weingarten played the violin for patients at Hadassah Hospital in Jerusalem during the two years he was learning in Israel after high school, he quickly realized it was a unique way to bring people together and bypass the awkward small talk that can occur between patients and well-meaning visitors.

“I realized that music allows a person to transcend the barriers that exist between different people and to begin to form a connection with them,” he explained.

When Weingarten arrived at Yeshiva University in 2011, he founded Music Vs. (pronounced Music Verse), an initiative run as a student club in universities and high schools across the country and abroad. Its goal is to use the universal languages of music, song and dance to alleviate the social discomfort associated with meeting strangers and create long-lasting friendships with those struggling to overcome medical conditions.

Recently, Music Vs. initiated what it calls a “5 Minute Phone Campaign.” Said Weingarten, “Everyone has five minutes, whether it’s making a Facebook status or checking their email for the 100th time each day. There’s always time for a five-minute break, and we can make those five minutes add up.”

The campaign is the latest step for Music Vs., which has already spread to countries like Uganda, Ukraine, Russia and Israel, and over 15 universities across the U.S. However, the 5 minute campaign goes even further. Now, hundreds of adults in addition to students are committing to call the elderly in their communities and maintain regular contact with them, even just with five-minute phone calls.

“While powerful and intimate,” explained Weingarten, referring to the phone calls, “it’s also something relatively easy and time efficient. Just like a musical minuet.

Weingarten, who was recently honored as a Point of Light at YU’s Annual Hanukkah Dinner and Convocation for his impressive efforts, serves as the founder and executive director of Music Vs., in addition to numerous other activities: he has already started rabbinic studies at RIETS, in addition to studying history and biology at YC; he was named a Kressel Scholar to conduct research at YC and Harvard; and he spent his summers working in the U.S. Congress and at Camp Simcha. He was accepted to Mount Sinai Medical School’s Humanities and Medicine program, and plans to pursue a career that encompasses the rabbinate, medicine and service to the broader community.

If you would like to bring Music Vs. to a college or high school in your community, or would like to join the 5 minute campaign or start it in your local synagogue, please contact Mark Weingarten at Weingarten.mark@gmail.com or sign up today.