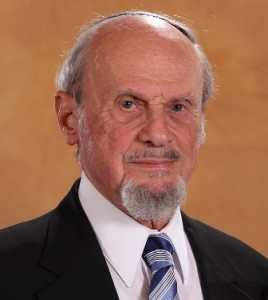 On the occasion of his 70th reunion from Yeshiva College, Rabbi Dr. Menachem Raab reflects on a life that took him from his hometown of Philadelphia, to New York to pursue a YU education followed by an array of professional jobs in New York, New Jersey, and Florida, to making Aliyah not once, but twice.  Of course, there were many memorable moments in between – some positive such as the growth of his family which includes 16 great-grandchildren, and some less so including watching his family be taken hostage for weeks as passengers on a hijacked plane. Throughout it all, Rabbi Raab had tireless energy, and though he is retired now, he certainly isn’t slowing down.

“I might not understand the more advanced computer applications these days,” said Raab, “but I work at my computer all day writing different shiurim and articles that I send out to people who subscribe to my e-mails.”

This tireless energy and dedication to being productive are trademarks of Raab’s personality. Born in 1923 and raised in Philadelphia, Raab attended public school—there were no Jewish day schools in those days, he recounted—and supplemented his Jewish education with Talmud Torah classes in the afternoons, but always looked forward to the day when he could attend Yeshiva University. “I was excited to have the chance to immerse myself more fully in Jewish studies,” he said.

Raab arrived on the Yeshiva College campus in 1940, and, in addition to his intensive Jewish studies, majored in both math and philosophy. Because he and his fellow students were exempt from the army due to their religious studies, Raab helped the war effort in other ways through volunteering. He also served as gabbai for the student minyan and was active in other extracurricular activities.

“I fondly remember the Thursday night gemarah learning sessions, which would continue through the morning and then we would just go on and have a regular day having not slept at all the night before,” said Raab with a laugh. “And, one night before a critical calculus exam, many students were panicking and so I invited them all to my room and went through the entire course with them until 2 a.m. I think every single one of them passed the test.”

In his spare time, Raab worked to help pay for his education. “I didn’t have much financial support from my family when I attended YC and semicha, and neither did many of my peers, since we were attending school in the wake of the Great Depression,” said Raab. “Many of us worked when we could between and after classes to make extra money.”

Following his undergraduate and semicha studies, Raab attended Columbia University, where he obtained his Master’s in Educational Administration, and afterward, began a long career in both the rabbinate and in Jewish education.

In Rochester, NY, for nine years, followed by eight years in Trenton, NJ, and then in Miami, Raab not only worked as a pulpit rabbi and Jewish educator in the local day schools but also helped organize regional gatherings of the Rabbinical Council of America (RCA). Raab ran conferences and monthly meetings of local rabbis to discuss pressing issues facing them in their small Jewish communities, and issues of national importance facing the Jewish people. “I like to keep busy, and not just sit back and be an observer,” said Raab simply.

It is this quality, perhaps, that came in most handy when a certain woman caught his attention right after he finished his rabbinical studies at RIETS.

“I frequented a certain cafeteria for lunch, and one day a girl comes in with a friend of mine from yeshiva, and he comes over to me and asks me if I know of a job for her,” recalled Raab. “I said, ‘Let me talk to her,’ and he said no and I said forget it. The next morning I meet them again, and when he left her to make a call, I went over and made a date with her right then and there.”

After a couple of months, Raab and Sarah Hammer got engaged and today, they have five children, 19 grandchildren, and 16 great-grandchildren.

Aside from being part of a family that played a part in the history of Israel (Raab is the grandson of one of the founders of Petach Tikvah, a major city in Israel), the Raab family also possesses a unique significance in the history of the entire Middle East, as former passengers on a plane that was hijacked by the Popular Front for the Liberation of Palestine (PFLP) terrorist group.

During a family trip to Israel in the summer of 1970, Raab flew back a week before his wife and children to officiate at a wedding at the synagogue he led in Trenton. The TWA plane on which his wife and children were aboard a week later was hijacked—one of four coordinated hijackings—and re-routed to Jordan.

“It was a horrible time,” recalled Raab, “and none of us knew what was happening.”

The hijacked plane was one of four coordinated hijackings, and David Raab ’70YUHS—Raab’s eldest son, who was 17 at the time—was removed with other Jewish passengers to a safe house in a Palestinian refugee camp near Amman. He was the last hostage to be released, and when he finally landed at JFK Airport in New York, thousands of people had gathered to greet his arrival, including a large contingent of YU and YU High School students who had been praying for three weeks for the hostages’ safe release.  David later wrote a book, Terror in Black September: The First Eyewitness Account of the Infamous 1970 Hijackings.

In 1973, the Raabs made Aliyah for a few years before taking up residence in Miami, where Raab was hired by the Central Agency for Jewish Education of Florida to initiate a new Jewish day school department which was to advise the Jewish federation on funding the Miami day schools and to help the day schools in all of Florida with their educational programs, teacher supervision and fund raising by creating and organizing events and programs. Raab’s tremendous success in Florida led him to be hired as principal of Hillel Day School, where he nearly doubled enrollment and raised the academic level.

When Raab retired, he and his wife returned to Israel, where they now live in the French Hill neighborhood of Jerusalem. True to his restless nature, Raab was eager to take over the RCA region in Israel when asked, and he quickly whipping a lagging group into one with strong membership and well-attended monthly meetings. “Being an organizer is one of my biggest strengths, and when I think back on my career, I am proud to say that no matter where I was, I helped get things done.” He also maintains a database of popular divrei Torah for each parsha and yom tov—13 years’ worth—at http://torahportion.wordpress.com.

Raab will celebrate his 70th college reunion this May. Upon reflecting over the decades of change and transformation that have taken place since he was a college student, Raab has many thoughts on the nature of a changed society. “My grandchildren bought me a Smartphone, and I think it’s smarter than me,” he joked. But, on a more serious note, Raab said, “I think something that will remain timeless is the importance of sincerity. Be sincere in all that you do, whatever field you enter and whatever direction your life might take, and you can’t go wrong.”