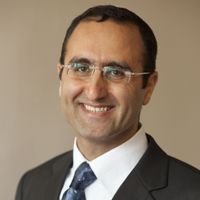 Dr. Daniel Tsadik is an Assistant Professor of Sephardic and Iranian Studies at the Bernard Revel Graduate School of Jewish Studies. He received his PhD from Yale University in 2002 and wrote a book in 2007 called Between Foreigners and Shi‘is: Nineteenth-Century Iran and its Jewish Minority (Stanford: Stanford University Press). Dr. Tsadik was recently granted tenure along with seven other faculty members from across YU’s undergraduate and graduate schools, in fields ranging from art history to mathematics and Judaic studies. His teaching and research interests include the history of the Jews in Islamic lands; modern Iran; Shi’i Islam; Iran’s religious minorities; and Iran’s Jewry.

1. What did you do before you joined YU as a faculty member?
I taught at the Hebrew University in Jerusalem in its Middle Eastern and Islamic Studies Department and its History of the Jewish People Department.

2. What is your favorite aspect of your job at YU?
I love interacting with students, teaching them and learning a lot from them.

3. What profession other than your own would you like to attempt?
I would be probably teaching kids in elementary school or own a small bookstore.

4. What is your goal as a scholar, and what is your goal as a teacher?
In general, I would be happy to further explore and research the history and culture of Iran and its Jews; specifically, I would like to pursue my projects on Iranian Jewry’s rabbinical literature and on Shiite perceptions of Jews and Judaism. My goals as a teacher are to  make the material I teach as clear and as enjoyable as possible, and to make my students understand the significance of the material for their past and occasionally for their present, as well.

5. What would your current and former YU students be surprised to learn about you?
I almost got accidentally shot when I was 20 years old during my army service by my own commander.