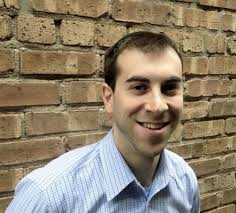 When Ross Gordon ’05SB took over operations for the Morg Mart, the popular student-run convenience stand in the basement of Yeshiva University’s Morgenstern dormitory on the Wilf Campus, he was just looking for a way to make a few extra dollars. Instead, he says, his entrepreneurial spirit began to flourish.

“Our famous Wednesday Night Chinese Food became a campus hit, and students flocked to the crowded basement to get their General Tso’s and hear tunes from Credence Clearwater Revival, which became our customary soundtrack,” said Gordon.

Gordon had originally majored in Marketing at YU’s Sy Syms School of Business, intending to go into advertising, but after a few English Composition courses, he realized his passion for writing. He switched his major to English with a focus in creative writing, planning to be a copywriter at an ad agency, with a minor in Business.

“Once I was in the English program, my writing continued to improve every semester,” said Gordon. “I won ‘Best Short Story’ in the annual writing contest in 2004, which was definitely one of the highlights for me at YU. I also found a lot of other outlets at YU for the things I loved, like playing basketball on the varsity team for a semester and a stint playing in the YU jazz band.”

“After Gordon graduated, he found it difficult to break into the advertising industry; many candidates had worked on their portfolios for their entire time at college, and competition for jobs was stiff. “Because I was getting married and needed a job, I took an unpaid internship at a small web-design firm run by Sholom Strick ’99SB,” said Gordon. “The internship became a full-time position by the end of the summer and was a do-it-all role as a copywriter, project manager, account manager, and garbage taker-outer, and I quickly learned the ins and outs of the web-design process.”

After two years, the firm closed, and Gordon got a job as a digital project manager at Arc Worldwide, the marketing services arm of Leo Burnett Worldwide, Inc., that specializes in digital communications, direct and database marketing, promotions and brand navigation. There, he played a more creative role on a few different projects by offering ideas and coordinating the process, and was eventually approached by the Vice President of Creative, who wished to gauge Gordon’s interest in becoming a copywriter. “Of course, I said yes right away,” said Gordon.

In his role as a copywriter, Gordon worked on national campaigns for Purina, Whirlpool, Kellogg’s, and a few other major brands. “My main account was Purina and I helped re-brand Fancy Feast,” said Gordon, who, despite this coveted role for any copywriter, admits to not being a cat person. “At one point, Purina had a competition among a few different agencies for an interactive campaign. Each agency had to vote on their favorite idea, and my idea won.”

In 2008, Gordon quit ARC to start his own digital advertising agency, at first called Tribe9 Interactive, which focused on affiliate marketing. Gordon further refined his skills in writing and digital branding for a diverse group of companies, including those dedicated to home improvement. Eventually, the company morphed into CraftJack, a lead generation/software company dedicated solely to home improvement contractors. In June 2012, the company was acquired by HomeAdvisor (itself owned by IAC).

Shortly after, Gordon helped found a subscription commerce company called Mystery Tackle Box, which sends a monthly box of fishing supplies to subscribers. “A lot of people don’t realize that the fishing market is a $45 billion industry,” said Gordon. “More people fish than play baseball. Fishing is especially huge in the South, where plenty of people fish exclusively in their free time. I grew up in Minnesota and had become interested in the industry early on, so it made sense to start a company that focused on it.”

Mystery Tackle Box has grown to become the leading subscription company in the fishing space. Encouraged by its success, Gordon next founded a fishing lure manufacturing company called BioSpawn Lure Company, which launched to an auspicious start this past summer.

“I wasn’t one of those kids who set up a lemonade stand at five years old and just knew he was going to be a captain of industry,” said Gordon. “Even with my Morg Mart experience, I didn’t envision going into business. I became an entrepreneur in a very organic, steady way, and woke up one day to realize that I owned three companies.”

For Gordon, the biggest challenge is staying focused on one project at a time. “I have a lot of ideas and see a lot of opportunities and I always want to get involved, but starting a company is a lot of work and sometimes taking on too much at once can be a distraction,” said Gordon. “But there is nothing as rewarding as seeing something you thought of and built being used by tens or hundreds of thousands of people. Getting daily e-mails of gratitude for building a great service is a wonderful feeling and helps encourage me in times of doubt.”

Gordon partially credits his success with his experience at YU, where the writing fundamentals he learned there still play a major role in everything he does. “The YC classes I took made me a better writer, thinker, and doer, and I strongly encourage anyone thinking of majoring in business to consider taking a few extra classes in YC, particularly writing classes,” he said.

For budding entrepreneurs at Syms who are hoping to one day build their own successful companies, Gordon suggests this tried but true simple tip: hard work. “An idea is important but it’s also virtually worthless if you don’t put in the work and attention to detail,” he explained. “It’s the execution of an idea that makes a company ultimately successful.”