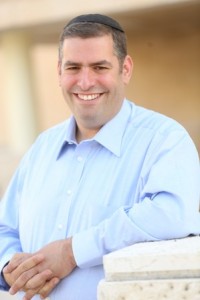 For Jason Schwartz ’93SB, making aliyah in the summer of 2008 was truly like coming home.  And, having been fortunate to walk a professional path that already exposed him to the landscape of Israeli businesses, his transition to living and working in Israel was seamless.

From Woodmere, NY, originally, Schwartz spent two years studying at Yeshivat Kerem B’Yavneh before attending Yeshiva University’s Sy Syms School of Business. He majored in Accounting and took an active role in several extracurricular pursuits, including serving on the Yeshiva College Philanthropy Society, which sponsored initiatives to creatively raise funding for a variety of good causes. As president of the Society in his senior year, Schwartz helped organize a bone marrow drive that, in a single day, saw some 600 students tested for their compatibility with those in need of bone marrow transplants and which raised $14,000 from students, faculty and alumni.

After he graduated Syms, Schwartz went to work with PricewaterhouseCoopers (PwC), where he served on the audit team and where he stayed for over six years. In 1995, though he didn’t know how to say balance sheet or audit committee in Hebrew, PwC invited him to join the growing Israel Business Practice, which advised high-tech Israeli companies which were expanding into the U.S. market. “It was a great opportunity for me to learn about how Israeli businesses ran and of the challenges they faced entering the U.S. market,” said Schwartz.

Thanks to this exposure, Schwartz was recruited to work for DealTime, the Israeli company that later became Shopping.com, the leading website for online comparison shopping. He served first as the company’s Vice President of Finance, and then as its Chief Financial Officer through 2004, when the company’s initial public offering debuted for over $600 million. Next, as CFO of Cyota, Schwartz was instrumental in the company’s rapid expansion and its acquisition by RSA Security for $145 million. He formed a close friendship with Naftali Bennett, Cyota’s co-founder and CEO, who today serves as the Chairman of the Bayit Yehudi party and the Economic Minister of Israel.

Following that, he served as CFO of Actimize, the largest and broadest provider of financial crime, risk and compliance solutions for regional and global financial institutions, and government regulators. Schwartz helped lead the company to an acquisition by NICE Systems Ltd. for $282 million, overseeing its growth to a global business. “I am proud to be a part of the ‘Start-Up Nation’ for the last 15 years,” said Schwartz. “It’s amazing to look back and see how many of my business colleagues, from investors to corporate counsel and many co-workers, are YU alumni.”

When Schwartz had the opportunity to relocate to Israel in the summer of 2008 and maintain his position at Actimize, he moved with his family to Beit Shemesh, Israel. The Schwartz family had been considering an eventual move to Israel, and couldn’t pass up the opportunity when it presented itself.

Having experienced the professional arenas in the U.S. and Israel, Schwartz notes several cultural differences between the two. “In Israel, people are much more blunt and direct than they are in the U.S, which makes management meetings very entertaining,” he mused, “but the work ethic in Israel is such that everyone is very dedicated and entrepreneurial—far beyond what I found in the U.S.”

For Schwartz, and others like him who serve in companies with large client bases in the U.S., there’s a perpetual challenge to find a harmonious work-life balance. “We have to maintain longer hours, on average, than most other professionals in Israel, because we need to be available for co-workers and customers across different time zones,” Schwartz explained.

Schwartz is married to Chani ’94S, a dentist who is not practicing in Israel but has a fulltime job as “CEO of Schwartz Enterprises,” as she calls it, and which largely consists of caring for the nine Schwartz children: Yoni, 16, Eli, 14, triplets Akiva, Gavi and Meira, 12, Dani, 10 and Ari, 8, Avigail, 6 and Uri, 3.

“I’m grateful that my family was able to acclimate to living in Israel so seamlessly,” said Schwartz. “Our community, Nofei Hashemesh, led by YU alumnus Rabbi Shalom Rosner and of which we are a founding family, is a microcosm of YU. It’s a place where Jews from all backgrounds, whether they are Ashkenazi or Sefardi or American or Israeli or Ethiopian, live peacefully side by side, daven with each other and raise families together.  I’m very proud of the community we are building here.” Schwartz is the President of Kehilat Nofei Hashemesh and is leading his shul’s capital campaign for a brand-new building.

He also volunteers time to the Israel Alumni Association, of which he is president. “That’s one of the really nice things about being an oleh in Israel,” said Schwartz. “There’s always only a degree or two of separation between any one person and the next one, and everyone wants to extend a hand and help another oleh out in whichever way he or she can. There are a lot of connections people can leverage, and one’s status as a graduate of YU is but one of them.”

He continued, “As the President of the YU Israel Alumni Association, I invite all YU alumni in Israel, including the influx of hundreds of new alumni over the past few years, to join me as we host educational and cultural programs, and to please reach out if they would like to coordinate a class reunion in Israel or host a visiting Rosh Yeshiva or YU faculty member in their communities.”

“Jason comes with his own unique brand of Israeli Yuzmah, initiative,and passion for his alma mater, especially as an alumnus living in Israel,” said Stephanie Strauss, Director of YU in Israel and the S. Daniel Abraham Program, who works closely with Schwartz on YU programming. “His positive encouragement and support enable us to more robustly engage and facilitate quality programs for our alumni living in Israel.”