Alumni Band Together to Help Israel Through ACHI 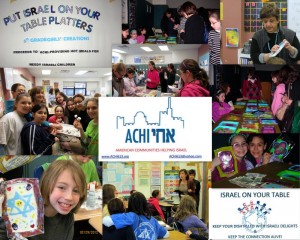 In 2004, a group of Central High School and Stern College for Women alumni banded together to form ACHI (“my brother”), an acronym for American Communities Helping Israel. The organization, which was founded during a time when Israel was suffering from a lack of tourists, seeks to create opportunities to raise awareness about the Jewish people’s connection to Israel and its people, as well as provide a marketplace where people can purchase Israeli goods—ideal for the vast number of people who very much wish to support Israeli businesses and the Israeli economy but are unable to travel to Israel in person.

“During the Intifada, I was very frustrated and I thought there was something everyone chutz l’aretz could do that would help keep Israel in hearts and minds of people overseas,” said Suzanne Muschel Weilgus ’66YUHS. “Along with some friends, I came up with ACHI.”

The group’s newest initiative? Helping ensure that every North American Jewish family has a “klee,” a designated object, such as a specific bowl, tray or dish, and keeping it stocked with Israeli products.

“Just like a mezuzah and a menorah are standard household Judaica, ACHI wants the klee to become the norm in people’s households, too,” explained Weilgus.

For Gloria Gordon, it’s obvious why spreading the word about ACHI’s mission makes sense to do among the YU network. “Where does a person get his values? From his home and from the institutions he’s attended throughout the years. As a Stern College graduate, I have witnessed the reinforcement of Zionism and deep love for Israel that YU perpetuates.”

Gloria transferred to Stern after freshman year at a secular college because she wanted to continue her Jewish Studies. At Stern, she found that—and more.

“One of greatest things I found at Stern was the chevrah that I made,” she explained. “The circle of friends you make at YU stays with you forever. I went to Stern with Tova [Fishman Taragin], and only reconnected with her years later, and now both of us speak all the time because of our ACHI responsibilities. It’s been wonderful to have that common bond from where we came from, which is Stern, and now have a common goal in our work for ACHI.”

Weilgus also believes that YU is naturally positioned to help spread the word about ACHI and its latest initiative.

“We want YU alumni around the world to join with us, their fellow alumni, to spread this message, as we all share a deep affinity for Israel. We want to make buying Israel the norm, and by having a klee, it serves as a tangible reminder of Israel each day. When you see it running low, you refill it. Think Israel, buy Israel.”