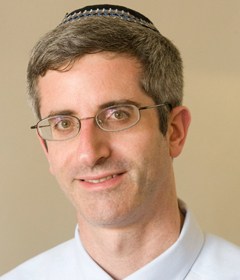 Rabbi Hayyim Angel is the National Scholar of the Institute for Jewish Ideas and Ideals (jewishideas.org). He has taught advanced Bible courses to undergraduate, graduate, and rabbinical students at Yeshiva University since 1996, and lectures widely. He has published over 130 scholarly articles, primarily in Bible, and is author or editor of fifteen books. His scholarship focuses on the interaction between traditional and academic approaches to Bible study. He previously served as Rabbi of Congregation Shearith Israel in New York (1995-2013), and as Rabbinic Scholar at Congregation Kehilath Jeshurun in New York (2014-2017). He received his B.A. in Jewish studies Summa cum Laude from Yeshiva College, his M.A. in Bible from the Bernard Revel Graduate School, his M.S. in Jewish Education from the Azrieli Graduate School of Jewish Education, and his Rabbinical Ordination from the Rabbi Isaac Elchanan Theological Seminary of Yeshiva University. He lives in Teaneck, New Jersey with his wife and four children.

Learning with my students! It is incredibly gratifying to grapple with Tanakh, commentaries, and the religious discussions they elicit with such intelligent, thoughtful, and motivated students. I also have taught several courses in RIETS to Honors Semikhah students on how to teach Tanakh in synagogues.

2. What profession did you think you would one day hold when you were a child?

It was a close call between Major League Baseball and trash collector for the Sanitation department.

3. What are some of your proudest accomplishments in your current role?

Many of my students are now rabbis, educators, school administrators, and scholars. They are now shaping the religious-educational landscape across America, Israel, and beyond. I’m also quite proud of the majority of my students, who have gone on to become productive laypeople in their communities.

4. How do you maintain a relationship with your students once they graduate?

The greatest amount of contact is with those in rabbinical-educational careers. They frequently reach out with questions in learning, to brainstorm with me over how to respond to difficult questions posed by congregants and students, and to invite me as a scholar-in-residence to their communities.