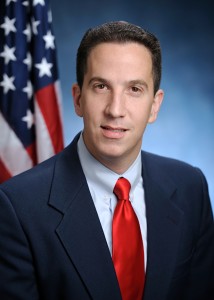 Phil Goldfeder was named Assistant Vice President for Government Relations at Yeshiva University in 2016 and has hit the ground running to lead YU government relations efforts by working to strengthen and develop relations between the University and federal, state, and local governments, and monitor legislation and policies that could have an impact on YU and its programs.

Goldfeder’s career in public service began as a community liaison for the New York City Council. His passion for community service, along with his unique ability to understand the needs in the neighborhoods of Queens, earned him a position as the Queens Director for the Mayor’s Community Affairs Unit under Michael Bloomberg. His capacity to bring people together caught the attention of New York Senator Charles E. Schumer, who hired him as the Director of Intergovernmental Affairs. In September of 2011, Goldfeder was elected in a special election to serve in the New York State Assembly where he focused on education, transportation and Sandy recovery, before joining YU in Fall 2016.

What is your favorite aspect of your job at YU?
My job at YU allows me the opportunity to collaborate with nearly every school, department and office on campus, with the most talented and amazing colleagues, but my favorite aspect is my daily interaction with the students. Whether we are working on community events, organizing meetings or just afternoon chats, the energy, intelligence and enthusiasm from YU students is unmatched and keeps me on my toes.

What profession did you think you would one day hold when you were a child?
As I’ve always looked up to my older brother and followed in his footsteps, my goal was to be a lawyer, but public service got in the way.

What would your colleagues be surprised to learn about you?
I was voted best dress politician in New York in 2016.

What has been the most fascinating aspect of combining your work in government with your position at YU?
My career in public service has given me expert insight into every level of government and helped me build relationships with diverse leaders across the state and country. It’s exciting to take the lessons I’ve learned and create this new position at YU to help the next generation of Jewish Leaders.

How has the recent political climate affected your job at YU?
As an elected official, I worked with anyone and everyone who was willing to come together and get things done, regardless of their party affiliation or ideological viewpoint. My job at YU is to expand our community footprint and build public/private relationships that will benefit the university and the community, which is important regardless of the people in office or current political climate.

Do you think you’ll ever run again for public office?
Depends if you are asking me or my wife… I’m not prepared to make any announcements yet, but Goldfeder 2020 does have a nice ring to it!