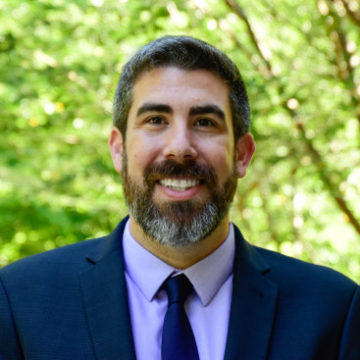 Rabbi Russ Shulkes was recently appointed Associate Vice President and Associate Dean of Institutional Advancement of RIETS. He has been the Executive Director and Campus Chaplain at Hillels of Georgia since 2012. Originally from Hollywood, Florida, Russ is a graduate of YU, where he received a BA in philosophy. After graduation, he went on to receive ordination, as well as MA in both Religious Education and Religion. Russ taught in Florida International University’s Religion Department for several years before beginning full-time work for Hillel, first for three years in England, and then with Hillels of Georgia for the past eight.

Russ has sat on the executive board of the Atlanta Rabbinic Association for the past three years, on Hillel International’s Talent Grant committee, has been a mentor for Hillel’s New Directors Mentoring Program, and is an Educator for the Jewish Learning Fellowship cohort program on multiple campuses. Russ has made the future of the Jewish Community the focus of his life with an emphasis on Jewish education and creating the leaders of tomorrow.

During his tenure at Hillels of Georgia, Russ has more than doubled the staff size, the annual budget and student engagement numbers. His love for Israel inspired him to create a BDS lecture series, and bring to campus The Florence Melton School Israel series, three Campus Israel Fellows from the Jewish Agency for Israel, the Onward Israel summer internship program, and Fact Finders Israel trips. He was awarded Ally of the Year by AIPAC in 2016.

“I could not be prouder being both an active participant and catalyst for Jewish Atlanta. Seeing it grow and thrive, I am certain that the groundwork we have laid today will ensure that the Jewish people and Israel are better off tomorrow. And now, as I turn towards YU, this is nothing short of a homecoming for me and my family. I look forward to both the opportunities and challenges of ensuring that RIETS continues to produce the next generation of Jewish leaders.”

Russ is married to Esther, a Stern and Revel alumna, and they have four children.

1. What profession did you think you would hold when you were a YU undergrad?

As I was a philosophy major at YU, I simply assumed I could be a traveling philosopher dishing out sagacious advice. But, alas, it seems that may not have been a real profession. After I graduated, I spent the next five years in Yeshiva continuing to ponder the best career options.

2. How has your past work experience prepared you for your current position?

Many of my previous positions set the stage for this one. In my previous role as Executive Director of Hillels of Georgia, I was able to conjoin the responsibilities of a Rabbi/Chaplain with Team Leader.  The Rabbi/Chaplain role gave me the opportunity, across several campuses, to both teach students and help them on personal or University levels, as well as plan and coordinate with representatives of countless other departments. As Executive Director, years of experience fundraising, budgeting, hiring, and putting strategic plans into action prepped me for the practicalities of my current job as only first-hand experience can. Before that, I was an adjunct professor of religion at Florida International University. That position inducted me into the vicissitudes of a university bureaucracy and allowed me to internalize the professorial side of the university experience.

3. What aspect of your job with YU are you most excited for?

I feel like I’m back home. Like many of us, I don’t view YU as solely an institution, but as the flagship for the Modern Orthodox Movement. I’m excited to be on the ground-floor for delving into the issues that most impact the Jewish people. I look forward to helping to mold that future, and as a role player in defining the Jewish people’s destiny.

4. What are some of the goals for your position at RIETS?

I have heard from some that RIETS is the crown-jewel of YU. My ultimate goal is for everyone to recognize that. We need to drive Klal Yisrael to understand the impressive work taking place in the Glueck Beis Medrash and Washington Heights, as well as help people internalize how that body of work impacts their own future. I would like to see a financially sustainable RIETS that revels in its Roshei Yeshiva, musmachim and Semikha students tackling cutting-edge contemporaneous issues.

My wife and I lived in the UK for three years working on college campuses as the equivalent of a OUJLIC couple. That experience helped mold our attitudes towards world Jewry, as we were able to acquaint and internalize the Jewish experience outside of the two largest world Jewish hubs. We were fascinated and saddened to learn that Modern Orthodoxy, as we know it, is hard to come by outside the US and Israel.