A captain on the winning YU intramural ultimate frisbee and basketball teams. A semi-professional football player in Israel. A writer for two YU campus publications. A commentator for YU’s Macs Live (men’s basketball games). A campus ambassador for Gift of Life. And two-time Vice President of the Sy Syms Student Council.

These plus multiple internships helped Benjamin Zirman ’18SB pave his way to where he wanted to be. A double major in business analytics and finance, and now working in data analytics for the NBA, Zirman describes the hard work, perseverance and out-of-the-box thinking that led him to his dream job.

Tell us about your journey. What was your major in college? What were you involved in? 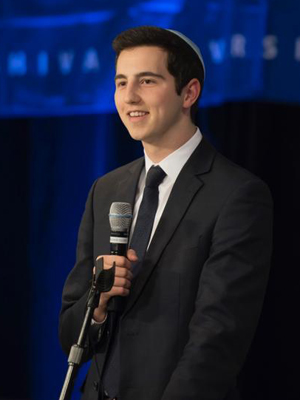 Emceeing at the Sy Syms dinner

I came to YU in 2015 ready to go down a typical finance career path. But after some self-reflection, I decided to take a less conventional route and pursue my passion for basketball. I had always loved playing and following sports as a kid, and I thought that college was the perfect time to try and make a career out of it. I had also noticed the growing wave of data analytics being applied to sports and thought that my double major in business analytics and finance would put me in a great position to try and ride that wave into a sports career.

I was in YU for seven semesters, and I worked in different internships six out of the seven. My first few were more business related, and I was aided by the YU alumni community. In my second semester, without any real prior experience, an alum hired me for my first-ever job. Additionally, my first job in sports, during my fourth semester, was with a sports management company that had posted on YU’s job board.

In the summer of 2017, I participated in TAMID’s fellowship program in Israel. I had joined the club the previous fall and chose their consulting track, which sets students up with consulting projects for Israeli startups.

Since I was interested in working in sports, I was set up with a basketball shot tracking company called RSPCT Basketball Technologies. RSPCT analyzes exactly where the ball hit the rim, the arc of the shot, the consistency of a shooter and more. It provides a whole new shooting data set to NBA teams to help them evaluate players on a deeper level than just makes and misses. I had an incredible summer working for RSPCT and had a chance to attend my first Summer League.

I told RSPCT that I was a data analytics major, and a club project turned into a job. They had so much shooting data that they were capturing but didn’t have the time to do any analysis on it. I was the fourth person working for the company, so even as an analyst I was given tremendous responsibility. I was a 22-year-old meeting with players, coaches and front office executives. During my 2018 academic year I had internships with the Nets and the Knicks, both doing financial analytics.

But those internships were further from the game than I wanted to be. I continued working with RSPCT after my summer with them and through the academic year and really fell in love with the work. One of their major clients was the Philadelphia 76ers, and because I lived near Philly, I worked with them closely and got to see just how innovative NBA teams were being with analytics and technology.

In addition to the amazing work experience, RSPCT also really helped me grow my network in the sports world. So, when it came time to choose a full-time job, I was well connected and had built a strong enough résumé to be hired as a stats analyst for the NBA G League, the minor league of the NBA.

I started with the NBA as soon as I graduated, about three and a half years ago. I started as a stats analyst, and now I run basketball analytics and technology for the G League. 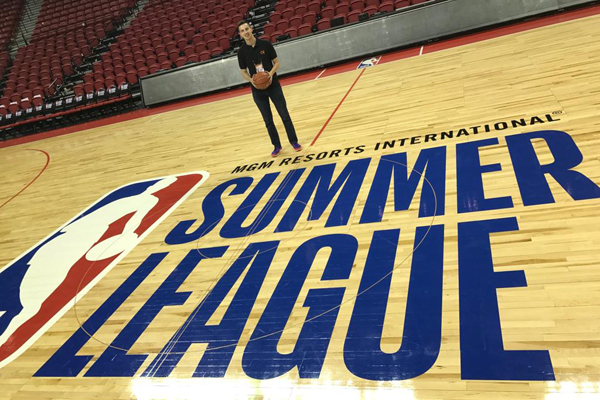 With RSPCT at the 2017 Summer League in Las Vegas

You’ve spoken to classes at YU. If I’m a freshman and I aspire to work in the NBA or in data analytics, what kind of advice would you offer?

I want to highlight three things that I think are very useful to getting a job in sports. First, I used a lot of my schoolwork to work on basketball analytics projects. In one class, I built a model that predicted a March Madness winner. It didn’t win me any money, but it gave me something to talk about in interviews. I also built a model that predicted NBA three-point percentages based on certain college shooting statistics. Use your schoolwork to get real-world practice, and do the job before you actually get it.

When I speak to classes, I talk a lot about the role RSPCT played in my career. Everyone wants to start out working for brand names, but those brand names want to see that you have something on your résumé. I built my sports résumé through the tech route. A lot of sports tech companies are coming onto the scene, and a lot of them are Israeli. I think that’s a great place to get work experience before going to the bigger names and leagues. I also participated in a lot of clubs on campus, which helped build my résumé early on.

The last thing I’ll say is that sports is all about who you know. I got very lucky that I was able to grow my network quickly. Students should definitely work on reaching out and making networking calls. There are people who will be willing to talk, especially if you have something interesting to say.

What are some of the challenges for Orthodox Jews in your field? And what have you done to overcome them? 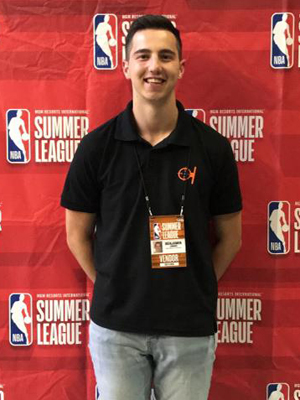 There are a lot of events and games on weekends, often on Shabbat, and that is difficult. When I first started and was trying to prove myself, there were events that I couldn’t attend. That stung, because I really wanted to be there and show that I was a team player willing to work just as hard as the next person.

When I was working in the G League bubble, I set up a system where I didn’t have to use my phone or my computer on Shabbat. I manage a team of four people who watch every G League game and make sure the stats are accurate. They text me plays that need to be reviewed if they are unsure what the statistical call should be. For Shabbat games, they would text my coworker instead. If anything came up, he could handle it immediately, and I would review everything after Shabbat. I sometimes worked until 2 a.m. on Saturday nights, but that’s what I had to do.

So it’s definitely a challenge and something that I consistently must make decisions around. But I am very proud of my Judaism and am very happy that I have a found a balance that works both religiously and professionally.

YU being in New York City is a huge professional advantage that not enough students take advantage of. There are so many jobs and internship opportunities for students, and many YU alumni are willing to hire YU students and give them a chance. I really encourage students to take advantage of the location and these resources. Internships are a great way to try and test out different career paths as well as build your résumé.