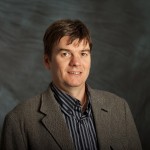 Dr. Emil Prodan, assistant professor of physics at Stern College for Women, has had an article accepted for publication in an upcoming issue of Physical Review E. The article, titled “Topological phonon modes in filamentary structures,” was completed by undergraduate students Nina Berg, Kira Joel and Miriam Koolyk in the research session of Summer of 2010 under Dr. Prodan’s mentorship. It focuses on a completely new phenomenon that involves classical mechanics, elements of topology from pure mathematics, numerical analysis, computer simulations and a good deal of imagination and intuition. The team used analytical methods to demonstrate that the filamentary structures can have extremely unusual vibrational properties, manifested in mechanical vibrations localized at the ends of the structures that cannot be suppressed by smooth deformations of the structures. Such vibrations are called topological phonon modes.

To demonstrate the concept, the team turned to the world of living cells, where they identified a filamentary structure called actin microfilament, which they considered likely to support topological phonon modes. The actin microfilaments fulfill vital functions for a living cell, such as providing the motile force cells use to navigate. The team also hypothesized that the topological phonon modes play a crucial role in how actin generates the motile force for live cells. Inspired by this structure, the team built a mechanical model whose motion was simulated on computers by solving the classical equations of motion. As the theory predicted, the simulations showed that the structure does indeed support topological phonon modes, which could now be visualized and studied in great detail.

Physical Review E is published by the American Physical Society, and in the last few years it has become the main forum for physicists working in soft condensed matter.