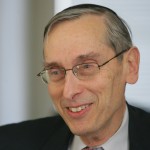 Dr. David Berger, dean of Bernard Revel Graduate School of Jewish Studies and Ruth and I. Lewis Gordon Professor of Jewish History, will deliver the keynote address titled “The Shifting Dynamic of the Jewish-Christian Encounter from the Middle Ages to the Present” at the 2011 Corcoran Chair Conference which will be held March 28-29 at Boston College.

Sponsored by Boston College’s Center for Christian-Jewish Learning, the conference, titled “Are Jews and Christians Living in a Post-Polemical World?: Toward a Comparison of Medieval and Modern Christian-Jewish Encounters,” covers the history of the Jewish-Christian debate in medieval times, which was marked by both stability and change. In the 19th century, Christians and Jews debated an issue that was entirely peripheral in the Middle Ages but which now moved to center stage: the ethical standing of their respective faiths. And today, in a post-Holocaust age, genuine rapprochement brings its own set of tensions focusing on challenges both old and new: the limits of dialogue, the abiding validity of the covenant with the Jews, the propriety of Christian missionizing, the Church and the Holocaust, the relationship between religion and the political sphere, and the moral, national and religious standing of the State of Israel.