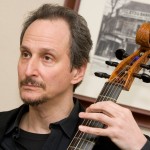 Dr. David Glaser, assistant professor of music at Stern College for Women, will premiere his new work, Catullus Dreams, at the second concert of the Cutting Edge Concerts New Music Festival 2011. The piece, a psychological portrait of the Roman poet, was written for soprano Linda Larson, and receives its world premiere on Monday, April 4, at the Leonard Nimoy Theater at Symphony Space.

Glaser, an award-winning composer, received his doctorate of musical arts from Columbia University and has taught at Stern College for Women since 1996. He is on the boards of the United States section of the League of Composers/ISCM and Parthenia, a consort of viols. He is the recipient of awards and commissions from the Fromm Foundation, the American Academy of Arts and Letters, and the Alice M. Ditson Fund, and has been a fellow at the MacDowell Colony and the Wellesley Composers Conference.