Grunhaus to Publish Book on Radak 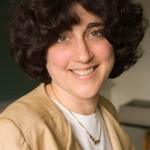 Oxford University Press has accepted for publication a manuscript by Dr. Naomi Grunhaus, assistant professor at Stern College for Women. The monograph entitled The Challenge of Received Tradition in Medieval Exegesis: Dilemmas of Interpretation in David Kimhi’s Biblical Commentaries explores the interplay between peshat and derash in Rabbi David Kimhi’s commentaries. The question of how to forge ahead using the new interpretive strategy of peshat, while still taking into consideration the classical literature (derash) was one of the most vexing problems facing medieval Jewish interpreters of the Hebrew Bible. Kimhi (commonly known by the acronym Radak) was a prominent Hebrew grammarian and biblical exegete in Provence. His location at the geographic and intellectual crossroads of France and Spain put him at the heart of these debates.

This monograph opens up a new area of academic study. Many scholarly studies consider the relationship between peshat and derash in the works of Rashi (1040-1105). Grunhaus’ book represents the first systematic and comprehensive exploration of those same issues for a later preeminent exegete, from a different medieval Jewish sub-culture. The expected date of publication for the book is summer 2012.