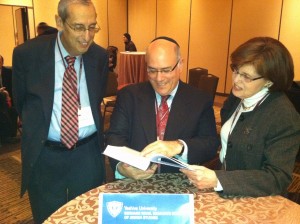 Presenting the volume to Berger, both Schacter and Carlebach spoke about how he inspired them as undergraduates at Brooklyn College to pursue doctoral work in Jewish History, and of the great impact he had on them, as well as on thousands of his other students throughout the years. Professor Carlebach also spoke about Professor Berger’s impact on the field of Jewish Studies as a whole. The program included remarks by Louis H. Feldman, Abraham Wouk Family Professor of Classics and Literature at Yeshiva University, who described David Berger—his student as an undergraduate in Yeshiva College—as the most stellar student he has known in his entire teaching career of over sixty years. Dean Berger himself offered heartfelt thanks to his colleagues for this meaningful tribute, and expressed boundless gratitude to his wife, Pearl Berger, Dean of the YU Libraries. The AJS conference, at which hundreds of Jewish studies scholars from around the world gather annually to present their latest research, was a fitting venue to honor the profound and multifaceted contributions Berger has made to this field over his scholarly career.