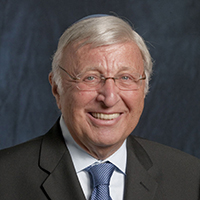 Rabbi Benjamin Blech, professor of Talmud at Yeshiva University, spoke at the Fifth Worldwide Meeting on Human Values, which took place from October 17-19 in Monterrey, Mexico.

Titled “Human Values and Universal Consciousness: A Path to Oneness,” the conference featured renowned speakers from more than 10 countries and many religions to address an audience of more than 15,000 on topics ranging from education rights for young women to science and spirituality. Rabbi Blech’s keynote presentation, “The Three Great Spiritual Truths That Can Change the World,” was delivered on October 17.

Material from these presentations will be incorporated into a unique values curriculum taught in schools across Mexico, whose universities and government were key sponsors of the event.

“I am delighted that the meaning of my life and Jewish life in general has been predicated on helping people understand the purpose of values as a necessary requirement to live as a civilized human being, and that these lessons will be incorporated into the Mexican school system and hopefully reverberate in the realm of moral values around the world,” Rabbi Blech said.

This was Rabbi Blech’s second time appearing at the conference; he also participated in the first convention in 2008. Rabbi Blech is a member of YU’s Speakers Bureau. To discuss his availability for speaking engagements, contact the Bureau at speakersbureau@yu.edu.