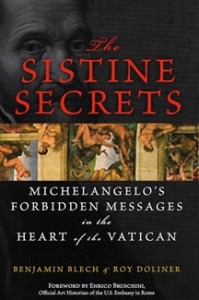 The international bestseller, The Sistine Secrets: Michaelangelo’s Forbidden Messages in the Heart of the Vatican, written by Rabbi Benjamin Blech, professor of Talmud at Yeshiva University, and co-authored by Roy Doliner, is set to be featured as a documentary television episode on Discovery Channel’s “Codebreakers” on Sunday, December 14 at 9 pm. Sistine Secrets is an examination of Michelangelo’s artistry and symbolism that is said to have incorporated many teachings of Jewish Midrash and Kabbalah into the Sistine Chapel.  The book is sold in 25 countries, translated into 15 languages, and received coverage on national television and press.  More film coverage is forthcoming.