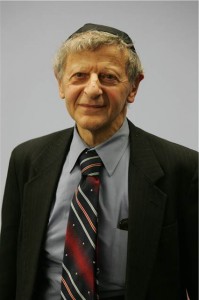 Titled Outside the Bible: Ancient Jewish Writings Related to Scripture (JPS 2014), the work is the first of its kind in a Jewish context, a vast collection of extra-biblical texts that comprise ancient Israel’s excluded scriptures, made accessible to scholar and general reader alike. The volumes examine writings such as the Dead Sea Scrolls, the Septuagint, Josephus, Philo and other transformative texts in a unique way—as they relate to each other and illuminate the Hebrew Bible.

The work was co-edited by Dr. James L. Kugel, professor of Bible at Bar-Ilan University, and Dr. Lawrence Schiffman, Judge Abraham Lieberman Professor of Hebrew and Judaic Studies at New York University and Director of the Global Institute for Advanced Research in Jewish Studies.

“This remarkable three-volume work will become an instant classic and will be consulted by scholars for generations to come,” said Dr. Selma Botman, provost and vice president for academic affairs at YU. “Deservedly recognized for its erudition and breadth, this edited volume reflects the highest standards of scholarship that Yeshiva University faculty are known for worldwide.”