Krishnan to Speak at TEDxCalPoly 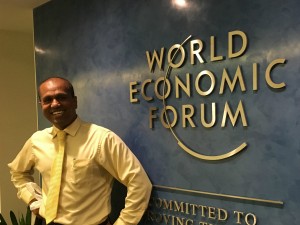 Dr. Hill Krishnan, an adjunct professor in the political science department at Stern College for Women, will give a talk at TEDxCalPoly, a TED event licensed out to California Polytechnic State University in San Luis Obispo, California, on October 21, 2016. He will discuss the conference theme of “Plot Twist” with a presentation about a student-led petition drive to support him when he was not selected for a tenure-track position at CalPoly in 2015.

In addition, this past January, Krishnan was invited to give a talk at the World Economic Forum (WEF) in Davos-Klosters, Switzerland. The invite came from the “Global Shapers,” a WEF initiative that networks hubs of young people who are exceptional in their potential, their achievements and their drive to make a contribution to their communities.

They had read Krishnan’s memoir, Caste Away: Growing Up in India’s “Most Backward” Caste, published in 2015, and asked him to speak about his experiences. He focused his speech on the theme of “Who writes your life’s story?” and spoke about how the “labels” he encountered in his life affected him.

“It is such an honor and privilege to talk at these events,“ said Krishnan, who currently teaches two courses, International Organizations and Introduction to Comparative Politics, at Stern College.