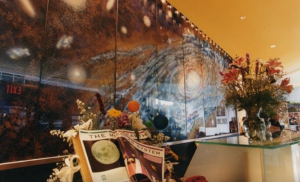 Twenty-eight-foot backpainted glass mural of the Milky Way at the entrance to the Children’s Hospital at Montefiore.

Mary Therese Creede, lecturer in painting and design in the art department of Stern College of Women, and John Jerard, lecturer in 3-D design at Stern College, recently created installations at the entrance to the Children’s Hospital at Montefiore Medical Center and the pediatric waiting area at Memorial Sloan Kettering Cancer Center, in addition to the work they do with with 3D murals in pediatric outpatient waiting areas. 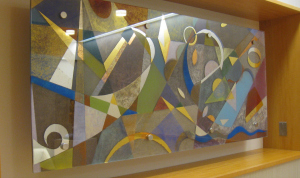 A new glass mural in the pediatric waiting area at Memorial Sloan Kettering.

This summer Creede and Jerard also completed fabrication of over 100 items for the run of the musical Hamilton in Chicago, which followed a busy spring spent creating flexible suits of armor for the Radio City Spring Spectacular.  These suits are replicas of those on exhibit at the Metropolitan Museum of Art.