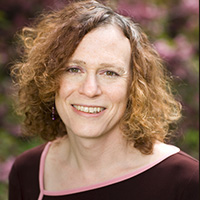 Her essay “ ‘You are making me now’: Writing God as a Contemporary American Poet” is the cover story of the current (May/Summer 2017) issue of Writer’s Chronicle, the magazine of Associated Writing Programs distributed to writers and writing programs around the country.

Her commentary on Parshat Tazria/Metzora, “Gender Inside and Outside the Camp,” was published by the Jewish Theological Seminary’s Torah Online.

“Tarot Readings Daily” was published as the Poem of the Day by the Academy of American Poets. Other poems were published by the anthologies Excavating Honesty: An Anthology of Rage and Hope in America and Bared, in the series Transition 50, and in the journals The Massachusetts Review, StoryScape and The Lavender Review.

She has also given talks at the Gender, Faith and Power panel of the PEN World Voices Festival, Yale University, Montclair State University, SUNY at New Paltz, Limmud FSU, the Sexuality, Gender and the Jewish Family Conference of the Center for Jewish Studies at Arizona State University, and Stern College for Women.

In addition, she taught a semester-long course in midrash and gender studies at JTS.