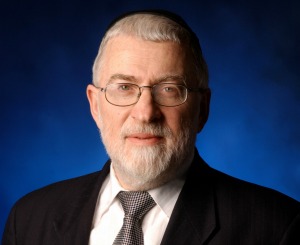 Rabbi Hershel Schachter, rosh yeshiva and Nathan and Vivian Fink Distinguished Professorial Chair in Talmud at Rabbi Isaac Elchanan Theological Seminary will be presented with the “Excellence in the Torah World” award at the World Torah Assembly later this month. The assembly, marking the 70th anniversary of the State of Israel, will convene December 31 at the Leonardo Plaza Hotel, Jerusalem. Rabbi David Lau, chief rabbi of Israel and president of the Chief Rabbinate Council and Rabbi Eli Ben Dahan, deputy minister of defense, will be honored guests at the award ceremony.

Rabbi Schachter will also be a presenter at the conference during the Torah Study in the Technological and Digital Communications Era session. His talk will be on “Talmud Bavli and Talmud Yerushalmi−Similarities and Differences between Torah Learning in Israel and Torah Learning in the United States.”